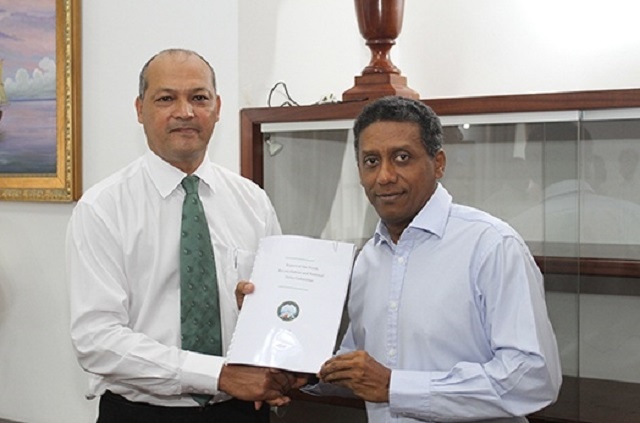 An official copy of the report was presented to President Danny Faure by the Speaker of the National Assembly, Nicholas Prea. (State House)

(Seychelles News Agency) - The Committee on Truth, Reconciliation and National Unity of the Seychelles’ National Assembly presented its report to President Danny Faure on Thursday at State house.

The executive and legislative branches of Seychelles have both pledged to approve a proposed bill that will determine ways to address past injustice some people have faced in the country.

The committee – established in 2017 by the National Assembly -- was set up to begin the groundwork for the creation of a national, independent truth and reconciliation commission. The commission's aim is to settle past political divisions that began with the 1977 coup d’état and uniting the country around a common agenda for the future.

Vice President Vincent Meriton told journalists that the report and bill will be considered by the Cabinet of Ministers next Wednesday.

“The National Assembly has engaged themselves to carry out a special session the following week to do the first reading. I think that the time has come for us to close this chapter in our history, to overcome the wrongdoings done to some people, so that we can know the truth and if there is any form of compensation, this can be considered,” said Meriton.

He added that both parties have agreed that the small number of the population that has been affected by past wrongdoings, this is felt by everyone in the country since Seychelles is small.

“There is the willingness to close this chapter, learn some lessons and do the necessary so that such things do not happen again and look forward towards a better future,” said Meriton.

Once the bill is approved, the new commission will be given legal power to listen to the victims and perpetrators and make decisions on how to go forth. The commission will have seven members – five Seychellois and two foreigners.

Wavel Ramkalawan, the chair of the committee in the National Assembly, said that “we need to get people who have been involved in similar processes around the world to help us because we are only taking baby steps.  Others have already gone through such processes and they will be here to help and direct us.”

One of the report’s recommendations is the enactment of a law to establish a Truth, Reconciliation and National Unity Commission, with the aim of promoting national unity and reconciliation. The report gives a historical background as to why the committee was set up and looks at various cases and category of injustice.

Ramkalawan said that the presentation of the report to the president is an achievement. The project has been going on for 15 months and the committee has gone through over 300 grievances put forward by victims.

“We have been able to analyse the different types of grievances. If the work that we have done can help the country, help victims put closure to this dark side of our history, then as members of the National Assembly, we feel that we have achieved something good for the country,” said Ramkalawan.

He added that what the committee has done will help the country move forward, help the country reconcile with itself and victims able to feel vindicated, be it through a pardon or compensation.

General » Be a reporter: Write and send your article » Subscribe for news alert
Tags: Reconciliation and National Unity, Committee on Truth, Cabinet of Ministers

COVID cases in Seychelles rise to 69; no plan to close borders