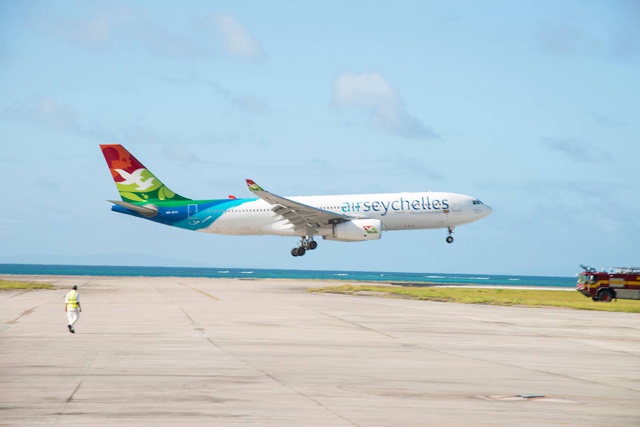 (Seychelles News Agency) - The Union of Comoros and Seychelles have put their words into action in regards to the strengthening of air travel cooperation between the member states of the Indian Ocean Commission (IOC).

The two countries have this evening signed an air services agreement which gives Air Seychelles unlimited air access to the Union of Comoros.

The signing of the agreement took place on the sidelines of the Ministerial Conference of the Tourism and Air Transport Ministers of the Indian Ocean commission, which ended over an hour ago at the Kempinski Resort at Baie Lazare, southern district of the main Seychelles island of Mahé.

The Chief Executive of the archipelago’s Civil Aviation Authority Gilbert Faure signed on Seychelles’ behalf while the Principal Secretary for External Relations of the Union of the Comoros, Inzouddine Hodhoaer did the honors for his country.

The agreement is reciprocal but as the Union of Comoros does not have a national airline at present, it is the Seychelles sides which stands to enforce its implementation.

This signing is in line with the declared vision of the sub-region to facilitate air travel between them for the benefit of their economies and ultimately their populations.

Once activated the Seychelles - Comoros flight will open up avenues for Seychellois to travel to Comoros and vice versa and just as importantly, it will provide for the reinforcing of the Vanilla Islands concept by enabling the promotion of travel packages which offer stop overs in the two island states.

The Union of Comoros has a diaspora of around 300,000 and the agreement will provide them with an additional option of routes when they travel home to visit their relatives.

Air Seychelles’ General Manager for Corporate Affairs Alan Renaud said that the unlimited access to the Comoros is unprecedented and a big accomplishment for the national airline. It is also another step in the country’s endeavor for there to be at least a daily flight between all the states of the sub-region.

Despite not having its own airline the Union of Comoros have reiterated its intention to be a full partner in the committees set up to work towards the vision of removing all barriers to increased connectivity among the states of the IOC, as adopted by the Ministerial Conference of the Tourism and Air Transport Ministers of the commission.