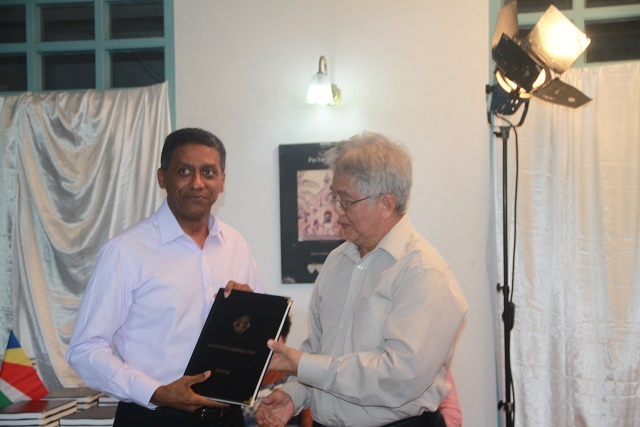 The first copy was presented to President Danny Faure on Saturday. (Julia Malbrook)

(Seychelles News Agency) - The first copy of the Creole version of the Seychelles Constitution was presented to President Danny Faure on Saturday in a ceremony as part of the activities to commemorate Constitution Day on June 18.

The current Constitution, which is the supreme law of Seychelles, was adopted on June 18, 1993, after the introduction of a multi-party system. That same year, the people of Seychelles went to the polls to elect a new president and representatives for a National Assembly -- the legislative body. That was the beginning of the Third Republic of Seychelles.

Work to translate the Constitution into Creole was initiated by the director of the International Creole Institute in  Seychelles at the time, Marie-Therese Choppy, followed by Leon Radegonde, Penda Choppy and Flora Ben David.

The current chief executive of the Institute, Flora Ben David said that the objective of translating the Constitution into Creole is to allow Seychellois to access the document in their mother tongue. This is one of the rights prescribed in the Constitution.

“It’s a project that has taken a lot of time but was worth the wait because today we have a book of law that we use in all life circumstances,” said Ben David.

She said that the team that worked on the project faced various challenges such as preserving the true sense of some words thus keeping judicial standards.

“The team also needed a good understanding of both language so not to misinterpret the text. It has been possible due to the will, engagement and active participation of everyone involved,” added Ben David.

One of the chapters on Seychellois Charter of Fundamental Human Rights and Freedoms was translated into Creole by lawyer and politician Alexia Amesbury. In 2008 till 2009, a National Steering Committee also worked on a simplified version of the constitution which was launched on February 21, 2014, to coincide with the United Nations-recognised International Mother Language Day.

The Creole translation of the document was realised in partnership with the Attorney General’s Office and the International Creole Institute.

Attorney General, Frank Ally said, “We are moving closer to more democratisation. It was a constitutional obligation for us to participate in this work.”

The legal writer of the Attorney General’s office, Victor Pool, is positive towards the impact the Creole version will have.

“This constitution can be much more successful than the English version and judging from the crowd today one can see that the project is at the heart of high government officials,” said Pool at the launching.