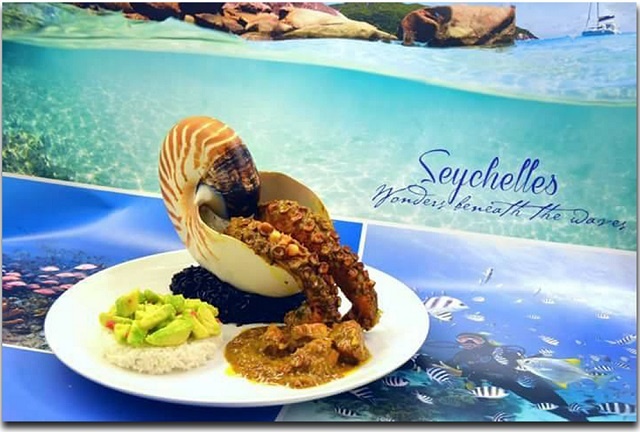 Jovanović won the prize with his photograph which showcased a spicy, slow-cooked octopus coconut curry. His caption describes the dish as “bursting with flavour as it is spilling out of the Nautilus' shell, perched on black wild rice and mellow avocado salad over a bed of jasmine rice.”

Jovanović, who said he is absolutely thrilled about winning, explained that it is a hobby of his to upload photos dishes he prepares to his Instagram account.

“After my mother mentioned the contest to me and reckoned I do decently, I agreed to give it a go. I had a few ideas and sent the final photo of the octopus coconut curry to my mum, who didn’t have much criticism for it, I knew at that point I would stand a chance at winning,” said Jovanović.

Commenting on the number of likes he got, Jovanović, who is currently studying in Switzerland, said that he had help from family members from Turkey, US, Sweden and Seychelles. They encouraged people to check the board’s page.

“I’m sure the STB’s page on Facebook got great international exposure. I’m bumping into friends asking me about Seychelles after watching all the videos STB has up and who are very keen on visiting,” said Jovanović.

According to the board, the Facebook photography competition album reached 15,556 people in total.

Jovanović will get to enjoy a two-night stay for two persons on half board basis in a Junior Suite sponsored by H Resort Beau Vallon.

The photo competition, titled ‘Lakwizin Kreol Seselwa’, Creole for the Seychellois Creole Cuisine, was open for locals, aged 18 and above. The top three participants with the highest number of likes came out as the winners.

Launched on April 16, the deadline of the competition was extended from May 7 to May 28 to get more people to participate.

“We had 80 plus people who showed interest, around half of which submitted their registration forms. We received 48 photos in total and 29 were chosen by our internal panel to be placed in an album on our corporate Facebook page for our followers to vote for their favourite,” said Jill Freminot, the board’s digital marketing executive.

Fan’s had 48 hours to vote for their favourite photo.

Amy Sefton got the second highest number of likes. Her photo that received 270 likes also depicted an octopus dish. Sefton also won the third prize with her second submission which raked in 208 likes.

“It is pretty cool to have won two prizes, it is very exciting. They said that you could enter twice, so I gave it a go and never expected to win with two. I was really lucky and this was a great opportunity to showcase the local food,” said Sefton.

The photography competition is an annual contest. This year, the board introduced a fourth winner – the Judge’s Choice Award, referred to as the most outstanding photograph.

“We wanted to introduce the Judge’s Choice Award as we wanted to give a fair chance and objective evaluation of all photos that met our entry criteria. We assessed the entries through technical aspects of photography such as exposure, focus, the rule of thirds, framing among others,” said Freminot.

The aim of the competition was building the database of images of the Seychelles Tourism Board, to be used in marketing campaigns around the world.

All photos submitted are now the property of the board and will be featured in the board’s image library and website as well as used by its offices around the world. Photographers will be credited accordingly.