Coral making a come-back on Seychelles' Aldabra, but fish numbers down 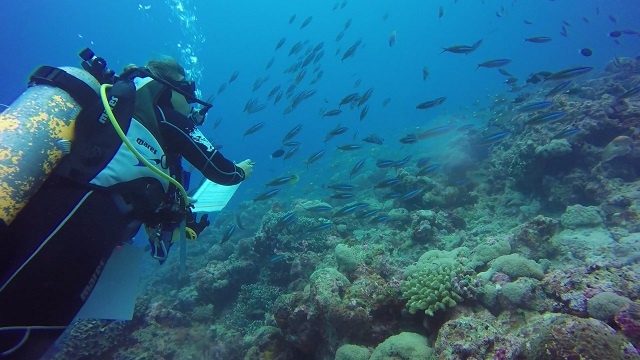 The Seychelles Islands Foundation on one of their marine monitoring surveys. (SIF)

(Seychelles News Agency) - A recent monitoring programme on the reef of the Aldabra atoll has shown an increase in coral cover but a decline in fish numbers, an official of the Seychelles Islands Foundation (SIF) said.

The coral cover, which is the percentage of reef that is covered by hard stony corals, showed a 51 percent increase in the fifth monitoring.

A total of 7,546  fish were recorded on 59 sections, said the SIF’s science and project coordinator, Jennifer Appoo, which “represents an overall decrease of fish abundance of 38 percent compared to the previous season.”

This was the second monitoring season carried out on Aldabra after the atoll experienced a devastating global coral bleaching between December 2015 and April 2016.

During the bleaching event, 51 percent of hard coral was lost from Aldabra’s reefs and replaced by rubble and turf algae.

In a survey conducted by the Seychelles Islands Foundation at the end of 2016 showed that despite higher ocean temperatures killing off almost 50 percent of all hard corals and a more severe loss of soft corals, the corals in the region were already beginning to recover.

Aldabra’s reef resilience was put down to two factors: firstly, sea temperatures in the area have not reached dangerous levels this year, allowing the corals a welcome reprieve from temperature stress. Secondly, Aldabra boasts an abundance of herbivorous fish such as parrot and surgeon fish - unlike the inner islands.

Appoo said the atoll offers a unique opportunity to study marine ecosystem composition, processes and changes over time in the absence of substantial human pressure.

“Insights into how reefs such as Aldabra's respond to increased pressure will help to decide whether coral restoration should be considered at Aldabra or for other heavily impacted reefs,” she said.

The science and project coordinator at SIF said that the marine data from Aldabra serves as a baseline which is extremely important considering the increasing threats to coral reefs nationally, regionally and globally.

On the question of the fish decline, Appoo said that herbivorous fish such as surgeonfish and parrotfish were the group that declined the most.

As to what could be done to replenish the fish stock, Appoo said that on Aldabra the team “do not interfere with natural processes and try as much as possible to limit human impact and interference on the atoll.”

According to SIF in an interview last year, these are the two herbivores often found on the dinner plates of locals and visitors. SIF had said that it might be wise for the government to look at protecting these particular species from artisanal fisheries as they have the potential to keep the algae growth in check, thereby promoting coral recovery.”