Senegal to the rescue as African teams struggle at World Cup 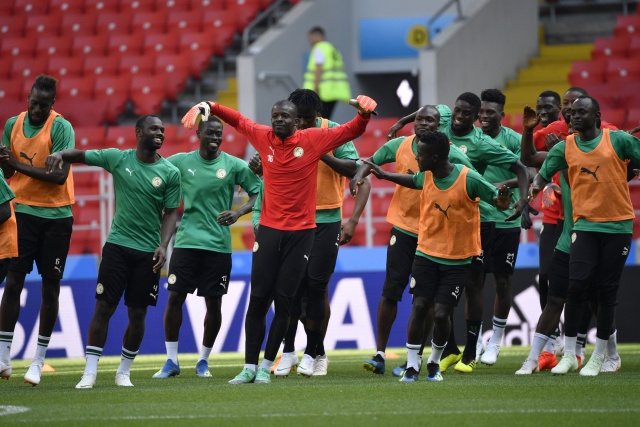 Senegal's players warm up during a training session, on June 18, 2018 in Moscow, on the eve of the team's opening match as part of the Russia 2018 World Cup football tournament. (Alexander NEMENOV / AFP)

(AFP) - Senegal proved to be Africa's saving grace at the World Cup on Tuesday.

Take away their win over Poland and it is five defeats in five for the continent's representatives in Russia.

After Nigeria and Algeria both reached the knockout phase four years ago, following Ghana's run to the quarter-finals in 2010, it is already looking like 2018 will be a step backwards for Africa on the biggest stage.

Following all the excitement of their first appearance at the finals since 1990, the Pharaohs find themselves staring at the exit door after only six days of competition.

Hector Cuper's side have been hampered by the fitness problems of Mohamed Salah, who played no part in the 1-0 defeat against Uruguay in Yekaterinburg.

On Tuesday, Salah was back but unable to prevent Egypt from losing 3-1 to Russia in Saint Petersburg, his late penalty proving a mere consolation.

"It is very difficult to know what would have happened (had he not been injured) but we know the quality he has," said Cuper.

Egypt have still never won a match at the World Cup in six attempts. Only Honduras (nine) have played more games at the finals without a single victory, and the Pharaohs know a draw for Uruguay against Saudi Arabia on Wednesday evening will see them eliminated.

Herve Renard's Morocco did not concede a single goal in their final qualifying group. And it took a late, late own-goal from the unfortunate Aziz Bouhaddouz to condemn them to a 1-0 defeat against Iran in their opener.

They had started that game superbly, pressing high, with Amine Harit excellent. But they ran out of gas and are left with games against Cristiano Ronaldo's Portugal and Spain to try to rescue their campaign.

"We have no time to feel sorry for ourselves," said Renard, and even if they do suffer an early exit, the hope is that this can be a learning curve for their talented younger players.

Gernot Rohr's Super Eagles were poor as they started their campaign with a 2-0 defeat against Croatia in Kaliningrad in a difficult group, also containing Argentina and Iceland.

Oghenekaro Etebo's own-goal and a Luka Modric penalty did for a Nigerian team almost unrecognisable from that beaten by France in the last 16 four years ago.

Epitomising this youthful side was Francis Uzoho, who at 19 years and seven months became the second-youngest goalkeeper to play in a World Cup game.

"Sometimes we were a little bit naive on set pieces but we will work on it," said Rohr, whose team face Iceland next.

Tunisia coach Nabil Maaloul had confidently asserted before the World Cup that his side would qualify from a group also containing Belgium and England and they almost held Gareth Southgate's side to a draw in Volgograd in their opening game.

They recovered from conceding an early goal and losing goalkeeper Mouez Hassen to injury, equalising courtesy of a Ferjani Sassi penalty.

However, Harry Kane's late strike saw the north African side lose 2-1, and they have now gone 12 World Cup games without winning since beating Mexico in 1978.

Only Bulgaria (17 games) have endured a longer drought, and it is hard to see them ending their run when they play the Belgians next, with Hassen out of the rest of their campaign.

Having seen their fellow Africans toil, Senegal did their bit by battling to a 2-1 win over Poland on Tuesday in Group H.

Sadio Mane was seen as the man dangerman, but it was the pace of Mbaye Niang, and a mistake by Poland goalkeeper Wojciech Szczesny, that clinched it for Senegal after Thiago Cionek's own goal put them ahead.

The Lions of Teranga are now dreaming of a repeat of their run to the quarter-finals in 2002.

"Of course we represent our country but I can also guarantee that the whole of Africa is supporting us," said impressive Senegal coach Aliou Cisse.