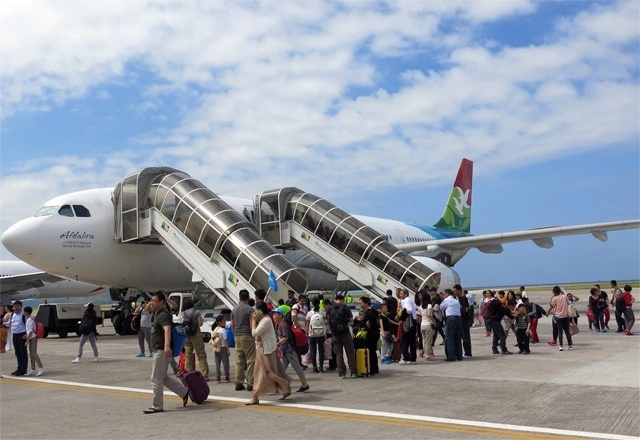 161,800 visitors disembarked in Seychelles from January to date, representing a two percent increase for the same period in 2017. (Air Seychelles)

(Seychelles News Agency) - The World Cup and a drop in the value of Russia's currency are negatively affecting the number of tourist arrival in Seychelles, a tourism official says, though Germany, France and Italy are sending more visitors to the island nation this year than in 2017.

The 115-island archipelago in the western Indian Ocean has seen only a two percent increase in figures in the first half of the year, which the chief executive of the Seychelles Tourism Board (STB), Sherin Francis, said is slightly below the STB’s predictions.

The Russian market has seen a drop of 18 percent for the first half of 2018 compared to the same period last year. Francis said that the FIFA World Cup and the value of the ruble -- Russia's currency -- “are not favourable for prompt recovery of this market.”

“Four years ago, we had only one percent increase and this year we see ourselves faced with a similar situation. Russians are travelling within Russia to watch the matches as the event is taking place in their country. We also see other potential visitors from Europe as well as other markets travelling to Russia to support their teams,” said Francis.

Francis said that although the increase is below predictions, “Seychelles has fared well for this first half of the year.”

Germany, France and UK and Ireland are the three leading tourism markets of Seychelles from January to June, contributing a significant number to the overall visitor arrival figures.  Russia, the United Arab Emirates and South Africa are however lagging behind for the same period compared to a year ago.

Figures from the National Bureau of Statistics show that over 161,800 visitors disembarked in Seychelles from January to date. This represents a two percent increase for the same period in 2017. Germany is the top market with 23,372 visitors, an increase of eight percent from last year.

“This has been complemented by the rebound of France and Italy, both growing by three and six percent respectively,” said Francis.

During his speech, the minister for tourism, Didier Dogley, said that the tourism industry remains “the bread and butter” of the Seychelles, an archipelago in the western Indian Ocean.

Dogley added that tourism has contributed "over 27 percent to our GDP (Gross Domestic Product) or $400 million in tourism earnings for the year 2017. This is almost the equivalent of 90 percent of our national budget for 2017.”

The mid-year marketing meeting also provided representatives from different local Destination Management Companies, tour operators, hotel establishment among others in the tourism industry to meet with directors of different markets and their team.

“It is always interesting to meet with people working in STB’s overseas offices. We can discuss with them, and today it was outlined that we need to develop our markets for the small hotels and self-catering as there is a demand for it,” said Sybille Cardon, the chairperson of the Seychelles Hospitality and Tourism Association (SHTA).

Cardon added that SHTA wants to attend road shows that are held overseas to represent the small establishments because too often foreigners think that Seychelles is only a five-star destination.

“That is not the case and it is important to showcase this. The small establishments also need to realise that they also need to participate in providing us with necessary equipment such as brochures and photos,” she said.

Talking about the next six months, the chief executive of the tourism board said that the together with her staff, “we will be able to maintain this performance and maybe increase up to four to five percent.”

“The reason behind what I’m saying is backed by the information I am getting from forward bookings, which show for instance that we can pick up with the UAE market,” said Francis.

The next marketing meeting will be held in December where the board will plan for next year.