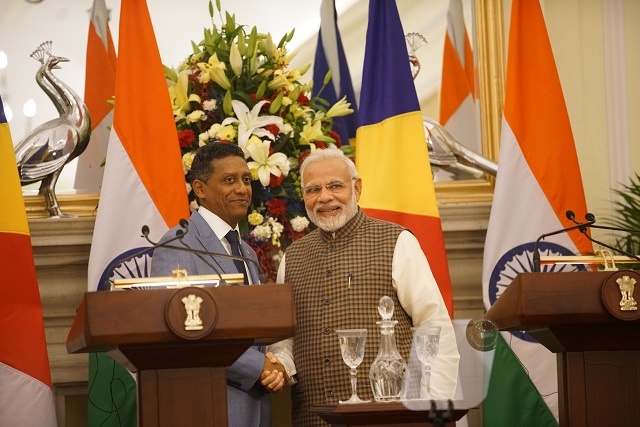 (Seychelles News Agency) - Seychelles will get a line of credit for the building of infrastructure and assistance in other areas with the signing of six agreements on Monday during President Danny Faure’s State visit in India.

The money will be used for the building of infrastructure for the military defence forces in Seychelles, said President Faure in a joint press statement with the Indian Prime Minister.

“Through a grant, we will build a new government house. We will also build a new police headquarters and a new building for the Attorney General’s Office,” said Faure.

Before the joint media statement of the two leaders, Seychelles signed six agreements with the government of India.

Seychelles, an archipelago in the western Indian Ocean, will receive assistance for the implementation of small development projects and in the area of cybersecurity.

The Seychelles’ Department of Foreign Affairs also signed an agreement with the Indian Foreign Service Institute of the Ministry of External Affairs.

The capital city of Seychelles, Victoria, and the city of Panaji in Goa will establish friendship and cooperation through a Twinning Agreement and Seychelles and India will also have an exchange programme for the years 2018-2022.

In the maritime area, the sharing of shipping information between the Indian Navy and the National Information Sharing and Coordination Centre of Seychelles will take place through a technical agreement.

On the subject of a military base on Assumption, Faure confirmed in his statement that this was discussed with the Indian Prime Minister Narendra Modi. Faure said in a subsequent interview on Tuesday that this was raised as part of the discussion on maritime security and he had the chance to explain Seychelles' position.

The Indian Hindu Business Line wrote on Monday that “India and Seychelles today agreed to work together on a project to develop a naval base at the Assumption Island keeping each other’s concerns in mind after talks between Prime Minister Narendra Modi and President Danny Faure.”

In his last presidential conference on June 4, the head of state of Seychelles had said that the military base on Assumption island that would also be used by India was dead. The project became controversial after the signing of an agreement between Seychelles and India, with the government supporting the plan but opposition members in the National Assembly and many private citizens against it.

In thanking the Indian Prime Minister for the new assistance India will be giving Seychelles, Faure highlighted the relationship between the two countries which for the past 40 years has been in a very wide range of fields. Faure also noted that defence cooperation had been one of the most significant sectors and referred to the gift of the second Dornier aircraft which he said will add significantly to the Seychelles Air Force’s capability for maritime surveillance.

He also expressed his appreciation for the warm hospitality and reception from the people and government of India and said that his first State visit “will cement the relations between the two countries for many years to come.”

Despite recent maritime incidents, Seychelles not slowing down drug fight at sea: official