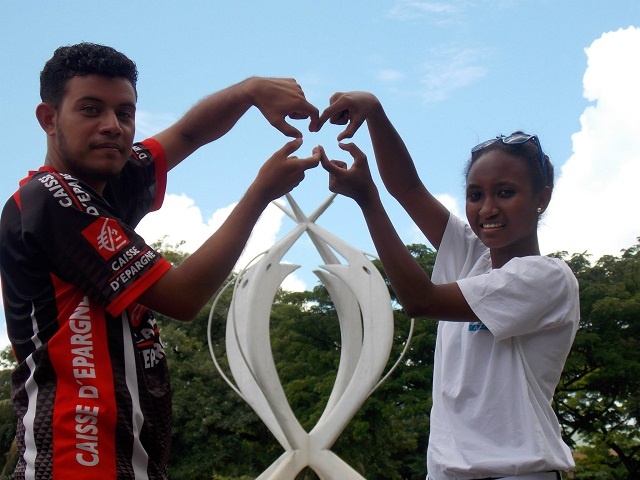 Bodwell (right) during one of the activities of the Youth Action Movement of Seychelle of which she is the co-founder. (Anaël Bodwell, Facebook)

(Seychelles News Agency) - Seychellois Anaël Bodwell received an award on Tuesday in recognition for her leadership skills and work done to improve other citizens' lives.

The Seychellois was among a group of exceptional young people from the Commonwealth recognised for working to transform lives in their community and beyond.

The 25-year old was in the United Kingdom to take part in a residential programme comprising of high-level meetings, engagements and workshops designed to help these young leaders further their life-changing work.

Bodwell - the third Seychellois to take part in the programme - received her award from her Majesty Queen Elizabeth II at a special ceremony held at the Buckingham Palace, in London. The Queen’s Young Leaders programme was established in 2014 by The Queen Elizabeth Diamond Jubilee Trust.

The awards have been given to young people aged between 18-29 from the 53 member states of the Commonwealth who have proven themselves to be exceptional leaders in their communities.

The residential programme, held in partnership with the University of Cambridge, includes high-profile networking opportunities, meetings and training designed to help young people develop as leaders and work with ever greater impact. Participants also got the chance to visit projects that are changing the lives of vulnerable people in the UK.

“The programme has given me a lot of knowledge in terms of networking, fundraising and media to personally become a better leader and further carry on relevant projects for the community,” Bodwell told SNA.

Bodwell is the co-founder of the Youth Action Movement of Seychelles, which teaches young people about their sexual and reproductive health -- a first youth group on the island nation to discuss these issues.

She was selected following a competitive process involving around 4,000 applicants across the Commonwealth. The young woman said that the experience gained through the award will give added value to the work she is doing with a group of unemployed young people.

“My most recent project is one where we are working with unemployed youth whereby I am advocating for green business opportunities such as sewing of reusable bags,” explained Bodwell.

According to Bodwell she is better equipped to lead workshops and has learned how to access untapped resources like grants and funding.

“The programme has also allowed me to tap into a wide network of young people around the Commonwealth who share similar issues in their respective countries, e.g. climate change. Together we have identified best practices and discussed on how to replicate projects across different regions.”

The Queen's Young Leaders Programme is held in partnership with Comic Relief, The Royal Commonwealth Society and the University of Cambridge’s Institute of Continuing Education.

In recognition of The Queen’s lifetime of service to the Commonwealth, the programme discovers, celebrates and supports exceptional young people from across the Commonwealth, leaving a lasting legacy for Her Majesty the Queen.

In 2014 a search was launched to find exceptional young people to receive the first ever Queen’s Young Leaders Awards. Hundreds of applications flooded in from incredible young people all dedicated to making lasting change in their community and beyond.

The Programme is now in its fourth and final year and has formed a unique community of 240 influential change-makers, from the Commonwealth.

The Commonwealth regroups a community of 53 nations working together to promote prosperity, democracy, and peace and through this year’s summit provide a platform to discuss global challenges and agree how to work together to create a better future for citizens.

Seychelles – an archipelago of 115 islands in the western Indian Ocean - joined the Commonwealth on the day of its Independence on June 29, 1976.