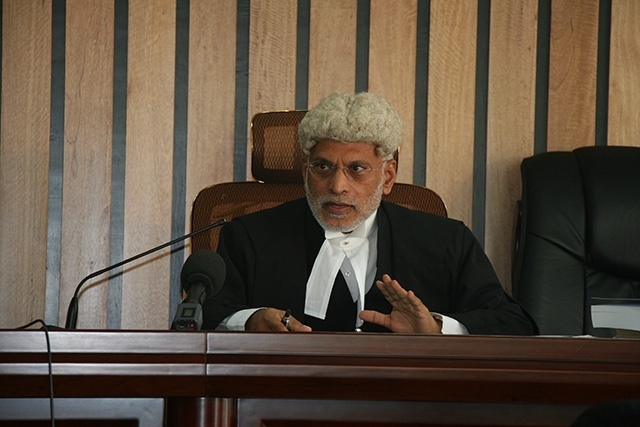 (Seychelles News Agency) - Justice Durai Karunakaran said on Wednesday that the dismissal of his case against the former Constitutional Appointment Authority (CAA) was not a fair judgement.

The Seychelles Constitutional Court dismissed the case of the suspended Seychellois Supreme Court judge on Tuesday on the grounds that the CAA had no legal obligations to allow Karunakaran to be heard.

The case was heard by Justice Laura Pillay, Melchior Vidot and Gustave Dodin.

Karanakaran told SNA that the court has missed out on the whole issue.

“That it was not a matter of legal obligation but it was a matter to take consideration to hear the party affected. How can you make a fair judgment? This is a joke,” he said.

The suspended judge added that “the issue is how the court has interpreted the word consideration. They have failed to consider the judicial exposition on this interpretation,” he said.

Justice Karunakaran filed a case against the former CAA, saying that he did not get a chance to be heard after he was suspended on October 10, 2016. His suspension came as a result of the decision of the Constitutional Appointments Authority to refer Karunakaran to a tribunal of inquiry to investigate the judge’s professional conduct.

The article also states that the suspension may on the advice of the CAA be revoked at any time by the president of Seychelles, an archipelago in the western Indian Ocean.

Karunakaran told SNA that this judgment “will leave a loophole in the judicial system as anyone can come and make a complaint about a judge anytime they want and the CAA will immediately set up a tribunal for the judge to stand trial.”

The Constitutional Appointments Authority is the body that recommends the appointment of constitutionals posts including that of judges to the president.

Indian-born Justice Durai Karunakaran -- a naturalised Seychellois citizen -- was appointed as Counsel and started practising law as Barrister and Attorney-at-law in Seychelles in 1983.