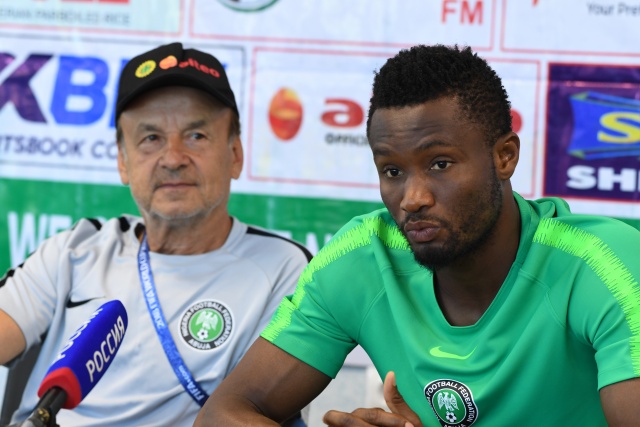 Nigeria's midfielder John Obi Mikel (R) and Nigeria's German coach Gernot Rohr address a press conference at the Essentuki Arena in southern Russia on June 20, 2018. The Eagles skipper paid a ransom of 10 million naira (about $28,000) to obtain the release of his father, who is in his sixties.(PIUS UTOMI EKPEI / AFP)

Amaraizu said the senior Obi's captors did not hurt him after seizing him at gunpoint last Thursday evening in Enugu, but they forced him to walk for about five kilometres (three miles) barefoot in heavy rain.

He said the Eagles skipper paid a ransom of 10 million naira (about $28,000) to obtain the release of his father, who is in his sixties.

No arrest has been made but police are on the trail of the abductors, he said.

Obi senior has been kidnapped once before, in the central city of Jos in 2011.

Kidnapping of prominent and rich people and their families is common in southern Nigeria. The victims are usually released unhurt after a ransom is paid.