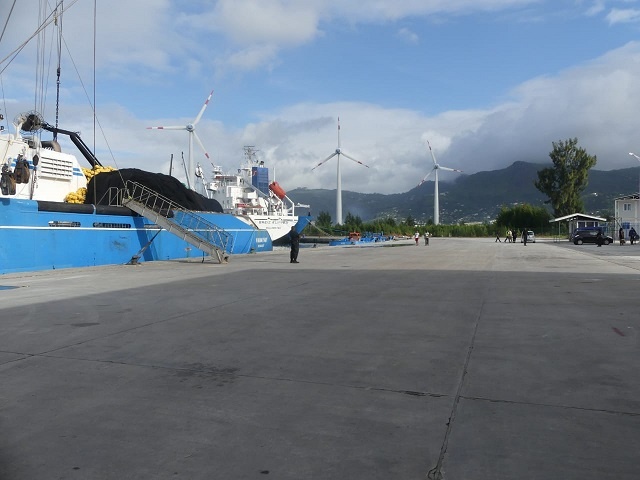 The 425-metre commercial fishing quay at Ile du Port is next to the Port of Victoria. (Julia Malbrook)

(Seychelles News Agency) - A new quay to reduce unloading time of purse seiners and relieve congestion in the Seychelles’ Port of Victoria was officially opened during the weekend.

The Ile du Port Handling Services (IPHS) port is a 425-metre commercial fishing quay next to the Port of Victoria.

Seychelles’ Minister for Tourism, Port and Civil Aviation, Didier Dogley, said that since the commissioning of part of the quay in January 2016, transactions at the ports have improved significantly.

A representative of IPHS, Arthur de Bretagne, said that the new quay “will be a cornerstone for new investments and new businesses dedicated to the fisheries industry.”

The IPHS was mandated to construct and manage the quay, undertake stevedoring operations and other related port activities. The port will be transferred to the government after recovery of the construction and financing cost, which amount to $18 million.

In his address, the minister for agriculture and fisheries, Charles Bastienne, highlighted the importance of the fisheries sector, the second top contributor to the island nation’s economy after tourism. About 87 percent of tuna fished in the Seychelles’ waters come through the port of Victoria as well as the Indian Ocean Tuna company that exports over 75,000 metric tonnes of tuna annually, said Bastienne.

The port is the third/largest public-private partnership project made by the government of Seychelles, an archipelago in the western Indian Ocean. The other two such projects were the Indian Ocean Tuna canning factory and Land Marine -- a private company offering services at Port Victoria.

The partnership for the port project was between the Seychelles’ government and Luxembourg-based Jaccar Holdings.

Jacques De Chateauvieux, the chairman of Jaccar Holdings, said his group is proud to be a long-standing partner in the sustainable development of industrial fishing in Seychelles.

Bastienne said that Seychelles now faces a growing demand for more infrastructural development and services to support its economic development.

“This is pushing our capital expenditure to an all-time high but tight business space limits our capacity as a government to meet these demands. We believe that the public-private partnership is the way forward,” said Bastienne.

This was echoed by Minister Dogley who said that “it is our wish that the local businesses will see this as opportunities for start-ups, expansion and even growth, capturing new markets through value-added products.”

These investments are part of the country’s plans to make Port Victoria the port of choice in the Indian Ocean.