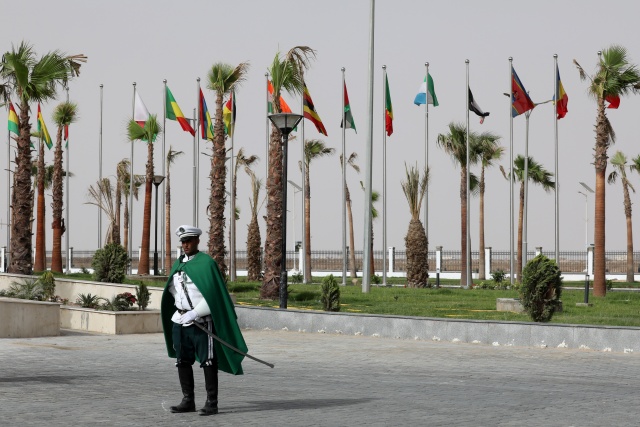 A mauritanian army soldier stands on duty during the African Union (AU) Summit on july 2, 2018, in Nouakchott. AU leaders agreed to set up an organisation called the African Observatory for Migration and Development (OAMD), based in the Moroccan capital of Rabat, Foreign Minister Nasser Bourita told a press conference in Nouakchott, the Mauritanian capital.(Ludovic MARIN / POOL / AFP)

AU leaders agreed to set up an organisation called the African Observatory for Migration and Development (OAMD), based in the Moroccan capital of Rabat, Foreign Minister Nasser Bourita told a press conference in Nouakchott, the Mauritanian capital.

"African leaders have taken the decision to task this important new tool with harmonising the national strategies of African states and improving interaction with partners (abroad)," he said.

The scheme, suggested by Morocco, comes amid a fresh crisis within the European Union (EU) over an influx of migrants taking the perilous trip across the Mediterranean.

But Bourita rejected an EU proposal to allow migrants rescued in international waters to request asylum in the EU from so-called "regional disembarkation platforms" located outside of Europe.

"Morocco strongly rejects this platform idea, which it considers inappropriate. It is an easy, counterproductive solution," he said.

At a summit in Brussels last week, European leaders agreed to consider setting up "disembarkation platforms" outside the EU, most likely in North Africa, in a bid to discourage migrants and refugees boarding EU-bound smuggler boats.

Member countries could also create processing centres to determine whether the new arrivals are returned home as economic migrants or admitted as refugees in willing states.

"The tragic fate that awaits African migrants on Europe's doorstep is made worse by the recurrence of intolerable behaviours against them in Africa itself," Moussa Faki Mahamat, the AU's commission chairman, said in a tweet on Sunday.

"Unless it wants to lose any credibility on this issue, our union cannot condemn obvious human rights violations against African migrants elsewhere and ignore it when similar things happen on the continent."

Hundreds of thousands of Africans have left the continent in a bid to reach Europe in recent years, often taking deadly routes through the desert and across the Mediterranean, as they fled war and poverty at home.

But migration was not on the official agenda of AU summit, which focused on security crises, trade and corruption.