Macron in Lagos calls on Africans to "succeed in Africa" 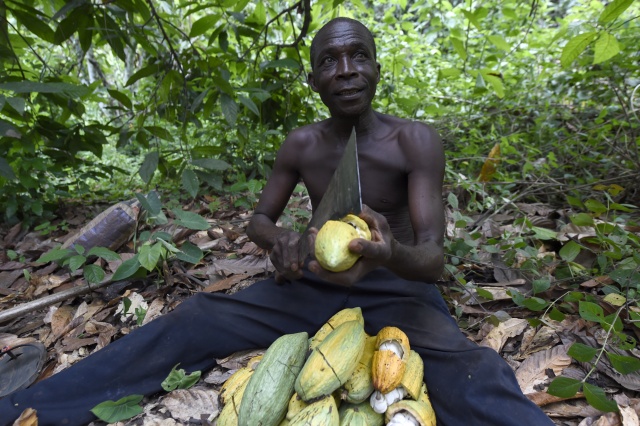 Farmer Oluranti Adeboye, 62, cuts harvested cocoa pods at Sofolu village in Ogun State, southwestern Nigeria, on June 5, 2018. Agriculture was once the mainstay of Nigeria's economy and provided jobs for more than 70 percent of the population until the discovery of oil. (PIUS UTOMI EKPEI / AFP)

(AFP) - French President Emmanuel Macron on Wednesday called for Africa and Europe to reach a "win-win" solution to migration during an address to 300 young entrepreneurs on the second day of his visit to Nigeria.

Saying that the continents share a "common destiny", Macron outlined his vision to solve thorny issue shaking the European Union, saying it can only be solved in the "long run" by Africa.

"We have to work with African governments," said Macron, addressing the crowd at an upmarket hotel in Lagos, the commercial hub of Nigeria.

"For me the sustainable answer is not just security," said Macron, adding that people were leaving peaceful countries including Senegal, Ivory Coast and Nigeria because of "a lack of hope, a lack of opportunities".

"These people, given the magnitude of this wave, cannot be accepted, at least, not all of them," said Macron. "We need more Africans to succeed in Africa."

The French leader reiterated the need to control a booming population in the continent where countries have a birth rate as high as "seven, eight children" and to fight against smugglers "who have close links with terrorists in the Sahel".

Microphone in hand, Macron has become adept in this town hall setting on trips abroad, first tested in Ouagadougou and honed in New Delhi, Washington and Aachen.

Earlier, he inaugurated the Alliance Francais, a cultural centre in Lagos, housed in a renovated colonial villa and launched in partnership with Mike Adenuga, a Nigerian billionaire who made his fortune in oil, telecommunications and services.

The Alliance Francais network, which includes 832 schools for more than 500,000 students, "makes it possible to spread French culture around the world", said Macron.

The influence of the French language is low in Nigeria despite being surrounded by Francophone countries, said the director of the Alliance Francais in Lagos, adding that "the potential is enormous".