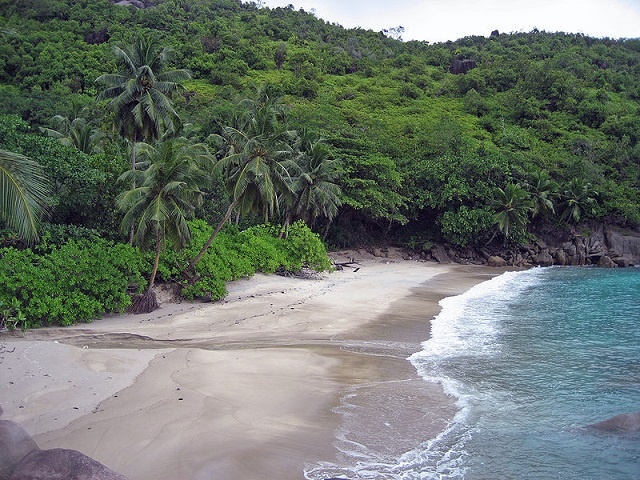 Anse Major was one of the beaches used as locations for the series. (Wikipedia) Photo License: Public Domain

(Seychelles News Agency) - The last episode of a series featuring beautiful scenes from Seychelles aired last week on Channel 4 in the United Kingdom, while local partners await the producers’ decision for a season two.

The comedy series, titled ‘High and Dry’, unfolds with passengers surviving a plane crash on a deserted tropical island. Scenes of the series were shot at some of the well-known beaches on Seychelles' main island, Mahe, namely Anse Major, Anse du Riz, and Barbarons.

Starring popular British comedian Marc Wootton, the series is being produced by a UK-based company -- Baby Cow Productions -- which handpicked some of the island nation's secluded and exotic locations for the scenes.

The Seychelles Tourism Board provided support for the filming on location and Sherin Francis, the chief executive of the Board, told SNA that the series has been a success.

“I did see one episode when I was in the UK, and as suspected the overwhelming beauty of Seychelles, the white sandy beaches, big boulders and lush green mountains, was so apparent in the show, especially in the drone images. People viewing the show would not miss that for sure,” said Francis.

She added that “the UK producers are yet to release their viewing figures, nevertheless, we have had amazing feedback from the UK, where the series has been widely and positively talked about in various media outlets including the BBC, ITV, Radio Times, among others.”

“There’s been immense praise for Seychelles’ natural beauty, with the actors themselves describing the island destination as the perfect location for the filming. They have been talking about various aspects from the turquoise waters, the food among many other facets,” she said.

The producers are yet to publicise their decision on whether they are anticipating filming a season two of the series and the location.

“Should this happen and should Seychelles be the chosen location it would surely be a plus for the country considering the amount of exposure that such productions bring,” said Francis.

The chief executive said she hopes that this opens up the destination not only to more holidaymakers but to other similar productions as well.

Baby Cow Productions, based in London and Manchester, is a British comedy television production company established in 1999 by Steve Coogan and Henry Normal. It has produced series like ‘I’m Alan Partridge, The Mighty Boosh, Red Dwarf, Nighty Night, Gavin and Stacey and Zapped.