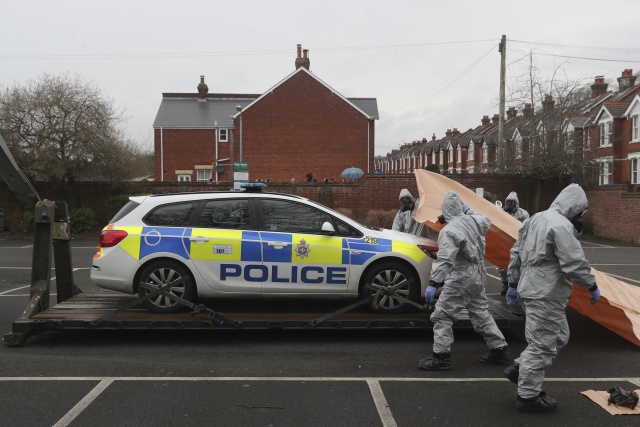 Military personnel wearing protective coveralls load a police car onto a military vehicle for it to be taken away from a cordoned off area behind a police station in Salisbury, southern England, on March 11, 2018, as investigations and operations continue in connection with the major incident sparked after a man and a woman were apparently poisoned in a nerve agent attack a week ago. Moscow accused Britain Thursday of playing "dirty political games" after London demanded answers from Russia over the poisoning of a couple with what British police said was the same nerve agent used against a former Russian spy. (Daniel LEAL-OLIVAS / AFP)

(AFP) - Moscow accused Britain Thursday of playing "dirty political games" after London demanded answers from Russia over the poisoning of a couple with what British police said was the same nerve agent used against a former Russian spy.

Russian foreign ministry spokeswoman Maria Zakharova also said London would have to apologise for its handling of the two poisoning cases and its accusations against Moscow.

"We urge British law enforcement not to get involved in dirty political games that certain powers in London have already begun and instead finally cooperate with Russian law enforcement in their investigations," she said at a briefing.

"I am sure that for everything that Theresa May's government has stirred up, this government and its representatives will have to apologise to Russia and the international community," she said.

London accused Moscow of being behind the March poisoning of ex-double agent Sergei Skripal and his daughter Yulia in Salisbury in southern England. The city lies just eight miles (13 kilometres) south of Amesbury, the town where the latest incident occurred.

The Kremlin has furiously denied the allegations.

Britain's interior minister on Thursday demanded that Russia explain itself over the use of the Novichok nerve agent on British soil.

"From the very beginning the Russian side proposed conducting a joint investigation with the British side and this proposal remained without a response," he added.

The Skripals collapsed on March 4 on a Salisbury park bench and were treated for several weeks before being released from hospital.

A police officer who came to their aid, Nick Bailey, was also hospitalised.

The incident sparked a diplomatic crisis that saw Russia and the West expelling dozens of diplomats in tit-for-tat moves.

Britain said the Soviet-designed nerve agent dubbed Novichok was used on the Skripals.