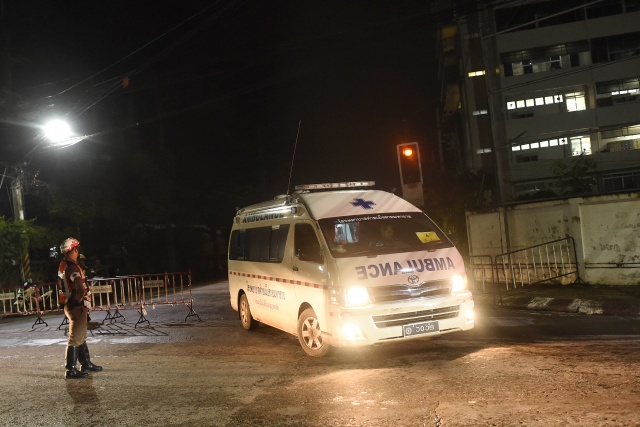 An ambulance leave the hospital, seen in the background at right, where the rescued boys where taken in Chiang Rai after divers evacuated some of the 12 boys and their coach trapped at Tham Luang cave in Khun Nam Nang Non Forest Park in the Mae Sai district on July 8, 2018. Foreign elite divers and Thai Navy SEALS on July 8 began the extremely dangerous operation to extract the 12 boys and their football coach as they raced against time, with imminent monsoon rains threatening more flooding that would doom the rescue operation. (Ye Aung THU / AFP)

(AFP) - A treacherous rescue bid to free a youth football team trapped in a flooded Thai cave entered its second day Monday, with nine of the "Wild Boars" still inside after elite divers guided four out.

Looming rain was one of the main enemies of the operation, threatening to flood the cave complex in mountainous northern Thailand, although a bewildering array of other dangers could also doom their safe return.

Thailand has waited anxiously for news of the safe return of the boys and their 25-year-old coach since they became trapped in the Tham Luang cave complex on June 23, in a saga that has dominated global headlines.

They spent nine days unaccounted for inside the cave, before British divers found the emaciated and dishevelled group huddling on a muddy bank.

On Sunday four members of the "Wild Boar" team were successfully brought out from the cave, after authorities decided they had to rush ahead with a rescue operation to beat monsoon rains.

They were guided by expert divers who plotted the hours-long escape through more than four kilometres (2.5 miles) of twisting passageways and flooded chambers.

Rescue chief Narongsak Osottanakorn on Sunday said four of the team -- affectionately dubbed by Thai social media Wild Boars 1,2,3,4 -- were "safe" but released few details about their condition or identities.

He said the extraction effort would likely resume early Monday.

"We've been working continuously overnight," a Chiang Rai government source told AFP on Monday morning, requesting anonymity, and confirming that there had only been a pause of the actual extraction operations.

With authorities releasing few details of the rescue bid, parents continued their agonising wait to be reunited with their sons.

"I am still waiting here at the cave, keeping my fingers crossed to see whether my son will be one of those to come out today," Supaluk Sompiengjai, a mother of Pheeraphat -- known by his nickname "Night" -- told AFP.

"We heard four boys are out but we do not know who they are. Many parents are still here waiting. None of us has been informed of anything."

But she added she was "happy" at the prospect of seeing her son again.

To get the boys out, divers will be forced by the narrow passages to accompany them one at a time.

None of the boys have scuba diving experience and experts have warned they could easily panic while swimming underwater in darkness.

The lack of space has added complexity to storing enough canisters of oxygen along the route out.

The death of a former Thai Navy SEAL diver who ran out of oxygen in the cave on Friday underscored the danger of the journey even for professionals.

The hordes of global and local media have been kept back from the cave and the hospital in Chiang Rai where the boys are believed to be under observation.

Night's relatives have said they believe the group went to the cave to celebrate his 16th birthday after a Saturday football practice and got caught as heavy rains caused the water inside the cave to suddenly rise.

A frantic rescue mission was hatched in the week since they were found.

Expert climbers, divers and Thai Navy Seals have mulled contingencies ranging from drilling an escape route through the mountain to waiting out the monsoon inside the cave.

But the rescue was prodded into action by the threat of a fresh round of rains and falling oxygen levels in the cave.