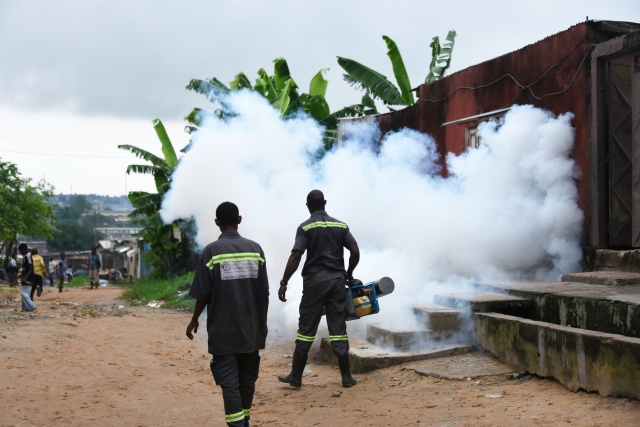 Agents of the National Institute of Public Hygene (INHP) carry out fumigation in the Anyama district of Abidjan on June 9, as part of the ongoing fight against Dengue fever. In 2017, Ivory Coast was one of the West African states in which outbreaks of diseases such as Dengue were reported. (Sia KAMBOU / AFP)

(AFP) - More than 80 percent of a dengue fever-spreading mosquito has been wiped out in an Australian town during a landmark trial scientists said Tuesday offered hope for combating the dangerous pest globally.

The insects were infected with the Wolbachia bacteria, which renders them sterile.

They were then released into the wild at trial sites around the Queensland town of Innisfail where over three months they mated with females who laid eggs that did not hatch, causing the population to plummet.

The Aedes aegypti mosquito is one of the world's most dangerous pests, capable of spreading devastating diseases like dengue, Zika and chikungunya.

It is responsible for infecting millions of people around the world each year and JCU's Kyran Staunton said the successful trial was a major step forward.

"We learnt a lot from collaborating on this first tropical trial and we're excited to see how this approach might be applied in other regions where Aedes aegypti poses a threat to life and health," he said.

The so-called sterile insect technique has been used before but the challenge in making it work for mosquitoes was being able to rear enough of them, identify males, remove biting females, and then release them in large enough numbers to suppress a population.

To address the challenge, Verily -- a life sciences company funded by Alphabet -- has developed a mosquito rearing, sex sorting and release technology as part of its global Debug project.

"We came to Innisfail with CSIRO and JCU to see how this approach worked in a tropical environment where these mosquitoes thrive, and to learn what it was like to operate our technology with research collaborators as we work together to find new ways to tackle these dangerous mosquitoes."