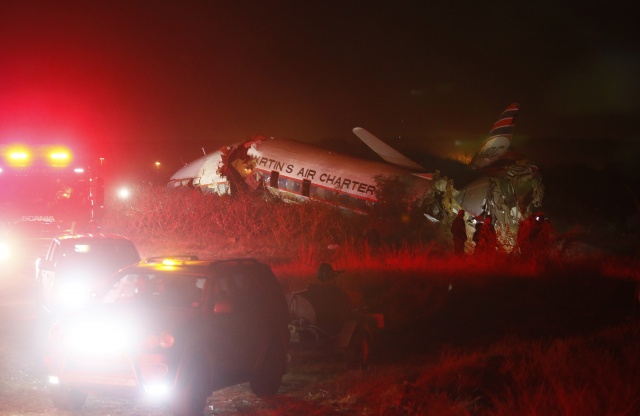 South African paramedics and emrgency services gather at the scene of a plane crash on July 10, 2018 at Wonderboom, on the outskirts of Pretoria, South Africa. Nineteen people were injured when a plane crashed on July 10, in a grassy area of the South African capital Pretoria, emergency services said, giving a preliminary toll. "Medics from ER24 and other services are at the scene of a plane crash at Wonderboom in Pretoria," Russell Meiring, spokesman for the ER24 medical service said. "We have 19 injured casualties ranging from minor to critical injuries at this stage and no confirmed fatalities." (STRINGER / AFP)

(AFP) - One person was killed and about 20 were injured when a vintage plane crashed Tuesday after it took off on a test flight from a small airport in the South African capital Pretoria, emergency services said.

The Convair-340 plane built in 1954 was due to soon be flown to the Aviodrome air museum in the Netherlands from Wonderboom airport in Pretoria.

The plane came down on rough ground about five kilometres (three miles) east of the airport, hitting a small factory building, injuring two people inside.

Images from the site showed the plane broken into several pieces. Paramedics helped survivors out of the aircraft and treated patients at the scene as firefighters tackled the smoking wreckage.

"The plane had 19 passengers on board which includes the pilot and the engineer," Johan Pieterse, the local government emergency services spokesman, told AFP.

"There was one fatality in the cockpit, we are not sure if it's the pilot or the engineer. We have got about 20 patients with injuries ranging from serious to critical, including two people who were on the ground."

The Aviodrome aerospace theme park near the central Dutch city of Lelystad said on its Facebook page that it was "hugely shocked" by the crash.

The plane, which had been expected to arrive at the Aviodrome on July 23, "crashed in South Africa during take-off on a test flight," it said.

It said the Convair-340 was a US-built passenger plane that could carry 44 people.

"We are not sure what happened at this stage," Rosella Passier, the Aviodrome's marketing manager, told AFP in The Hague.

"All we know is shortly after take-off the plane experienced trouble and crashed."

The plane had been due to fly later this week to Aviodrome via east Africa, through Egypt, Croatia, Austria to the Netherlands.

A spokesman for Martin Air said it had no information about the plane or the crash.

The plane was supposed to leave South Africa around Thursday, according to Dutch news agency ANP.

The Aviodrome is one of the Netherlands' largest theme parks, where visitors can view various aircraft close up, including a KLM Boeing 747 and Soviet-era MiG-21 fighter jet.

South African Civil Aviation Authority spokesman Kabelo Ledwaba said its investigators were at the scene and would issue a statement.