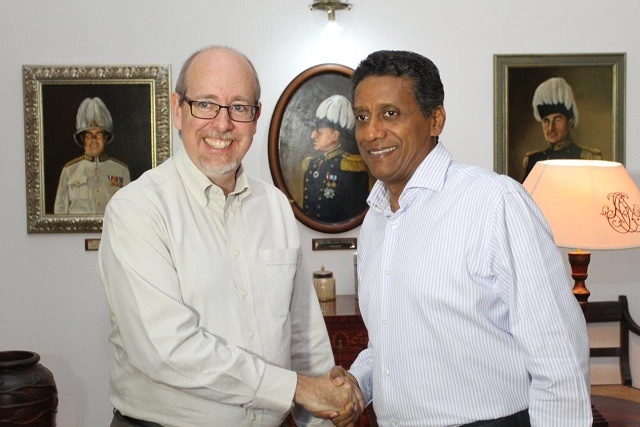 Ian Myles paid a farewell visit to the President of Seychelles, Danny Faure, at State House in Victoria. (State House)

(Seychelles News Agency) - Canada and Seychelles will continue working together through international platforms for the advancement of global issues such as ocean management, maritime security and human rights, said the outgoing Canadian High Commissioner on Tuesday.

Ian Myles paid a farewell visit to the President of Seychelles, Danny Faure, at State House in Victoria.

During the meeting, President Faure thanked the outgoing High Commissioner for his exceptional contributions in strengthening the diplomatic ties between Seychelles and Canada, said State House.

“Over the years, the relationship between Seychelles and Canada has flourished, culminating into close engagements across different sectors. We hope that the friendly ties between our two governments can be further consolidated and I am certain that your successor will work with the same enthusiasm to further cement the solid bilateral bonds we have enjoyed over the past decades,” said Faure.

The President of Seychelles, an archipelago in the western Indian Ocean, also expressed the appreciation and gratitude of the island nation for the continued support and assistance provided by Canada both on a bilateral and multilateral level.

The meeting was also an opportunity for Faure to brief the High Commissioner on his recent encounters with Canadian Prime Minister Justin Trudeau and Seychelles’ participation at the G7 Summit held in Québec, Canada last month.

Speaking to the press after the meeting, Myles said that despite the vast distance and size between Canada and Seychelles, the two countries have many values in common and common interests at an international level.

He said that the two countries will keep working together through platforms like the United Nations, the Francophonie and the Commonwealth for the advancement of global issues.

“We will also be working on issues around human rights. It’s clear to me that Seychelles and Canada have both embraced diversity and I think that makes us unique when the world is grasping on how to deal with its differences,” said Myles.

Diplomatic relations between Canada and Seychelles were established on June 29, 1976, the day the island nation got its independence from Britain.