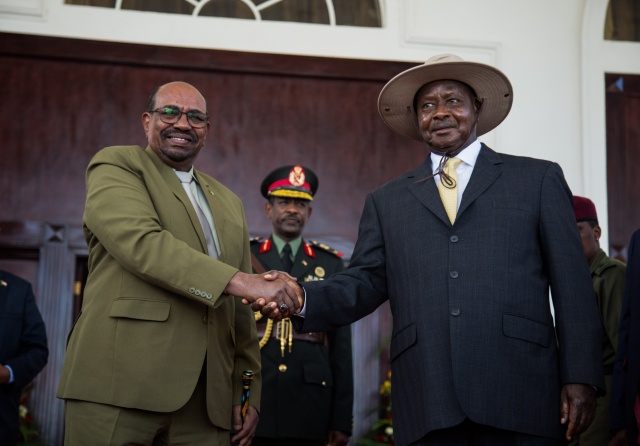 (AFP) - Sudan summoned the European Union ambassador to its country on Wednesday to protest against an EU statement criticising Uganda and Djibouti for hosting its President Omar al-Bashir, who is wanted by the International Criminal Court.

The Hague-based ICC has issued arrest warrants against Bashir, accusing him of war crimes and genocide in the deadly conflict in Sudan's western region of Darfur that erupted in 2003.

Sudan's foreign ministry said it rejects the EU's criticism that Djibouti and Uganda "did not surrender" Bashir during his recent visits there.

"The ministry of foreign affairs summoned today the EU ambassador to express Sudan's regret and rejection of EU's statement that puts pressure on African countries and calls on them to accept allegations of ICC about Sudan," the ministry said in a statement.

Bashir visited Uganda last week for a summit with his Ugandan counterpart Yoweri Museveni and South Sudanese President Salva Kiir to negotiate a deal aimed at ending the war in South Sudan.

He also travelled to Djibouti to attend a ceremony marking the launch of the first phase of Africa's biggest free-trade zone.

Both Djibouti and Uganda are parties to the Rome Statute of the ICC and accordingly are obligated to arrest Bashir on their territory.

"President Bashir is doing his duty according to the mandate given by IGAD states to bring peace to South Sudan," the foreign ministry said, referring to Intergovernmental Authority on Development -- a regional trade block -- that is pushing a fresh bid to end the war in South Sudan.

Bashir is currently hosting talks in Khartoum between South Sudan's warring factions to end the war that has killed tens of thousands of people and displaced nearly four million since it broke out in December 2013.

Bashir faces charges of genocide, war crimes and crimes against humanity relating to the conflict in Darfur.

The war in Darfur broke out when ethnic minority rebels took up arms against Bashir's Arab-dominated government, which launched a brutal counter-insurgency.

The UN Security Council asked the ICC in 2005 to investigate the crimes in Darfur, where the UN estimates at least 300,000 people have been killed and 2.5 million displaced.

Bashir denies the charges, and his visit to South Africa in 2015 triggered a major controversy.

Last year the ICC ruled that South Africa had failed in its duties to the court when it refused to arrest Bashir.