Over 40% of voter cards distributed ahead of Mali poll: govt 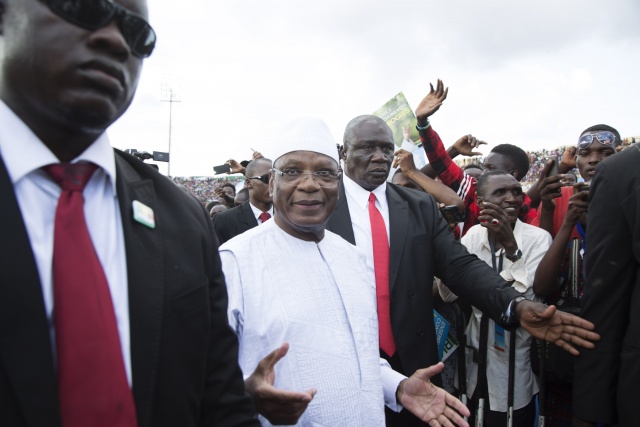 Malian President Ibrahim Boubacar Keita (C) arrives at his campaign launch rally in Bamako on July 8, 2018. Mali's incumbent president Ibrahima Boubacar Keita, who took office in 2013, and opposition frontrunner Soumaila Cisse are expected to be the two main candidates in the July 29 polls out of a field of 24 hopefuls. (Annie RISEMBERG / AFP)

(AFP) - Slightly more than 40 percent of voters in Mali have received their voter cards, two weeks before election day, the government said Thursday, amid observer worries that most still had to be distributed.

The national distribution rate stood at 42.51 percent, the Malian government said in a tweet. "Sikasso region (south) comes on top with 777,245 voter cards distributed, or 59.18%."

But only 12 percent of registered voters had picked up their voter cards in Kidal, the restive northern town hit by an Islamist insurgency. In Mopti, in also-troubled central Mali, only a quarter of voters had done so.

The head of a European observation mission said on Wednesday she was "worried about the pace of distribution," ahead of the July 29 vote.

The official campaign to become president of Mali kicked off on Saturday under heightened security.

Mali's incumbent president Ibrahima Boubacar Keita, who took office in 2013, and opposition frontrunner Soumaila Cisse are expected to be the two main candidates in a field of 24 hopefuls.

"Security during the electoral campaign and vote are major challenges, especially in the centre and north," Cecile Kyenge, head of a European Union electoral observation mission, told reporters on Wednesday.

Mali has been struggling with an Islamist insurgency in the north which has spread south and into neighbouring countries Burkina Faso and Niger despite peace efforts.

The international community, including the UN mission in the country (MINUSMA) and French forces present in the country, have put high hopes in the poll which could revive a peace agreement signed in 2015 between the government, government-allied groups and former rebels.