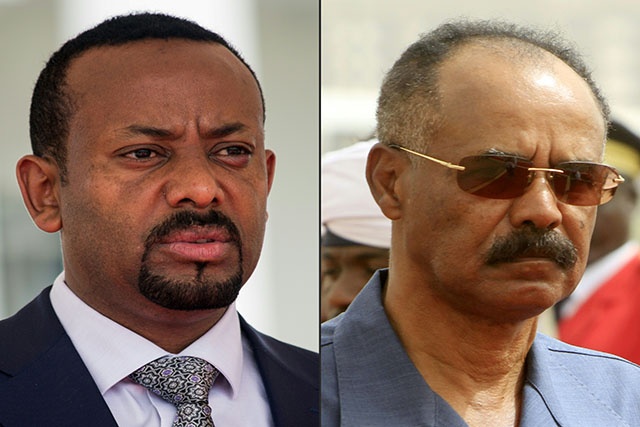 (AFP) - Eritrean President Isaias Afwerki arrived in Ethiopia on Saturday for a historic visit to cement peace less than a week after the two nations declared an end to a two-decade conflict, an AFP reporter said.

Ethiopian Prime Minister Abiy Ahmed greeted Afwerki as a brass band played before inspecting a guard of honour on the start of the three-day visit.

The trip comes just five days after Abiy left Eritrea as part of a dizzying peace process aimed at ending decades of animosity and conflict that began when the Ethiopian premier last month agreed to abide by a UN-backed border ruling and hand disputed territories back to Eritrea.

"The visit will cement further/add momentum to the joint march for peace and cooperation set in motion by both leaders," Eritrean Information Minister Yemane Gebremeskel said on Twitter Friday.

Ethiopia's state-affiliated Fana Broadcasting Corporate said Isaias would stay three days during which the Eritrean embassy would be reopened and his delegation would visit an industrial park in an itinerary highlighting the restoration of diplomatic and trade ties.

Three marching bands, traditional dancers and red carpets were rolled out to greet Isaias at the airport.

Ethiopians lined the main road from the airport to the city dressed in white shawls and waving palm fronds.

The roads of Addis Ababa were lined with Ethiopian and Eritrean flags flying side-by-side as well as banners and photos of the two leaders who on Monday signed a declaration declaring an official end to the war.

The emotion-filled reunion between the two countries has seen residents able to speak to each other via telephone for the first time in two decades as communication lines were re-opened.

Direct flights are due to start next week.

Once a province of Ethiopia, Eritrea seceded in 1993 after a long independence struggle, but a row over the demarcation of the shared border triggered a brutal 1998-2000 conflict which left 80,000 people dead before settling into a bitter cold war.