World Cup fans in Seychelles, with its linguistic ties to France, have a favourite in the football final 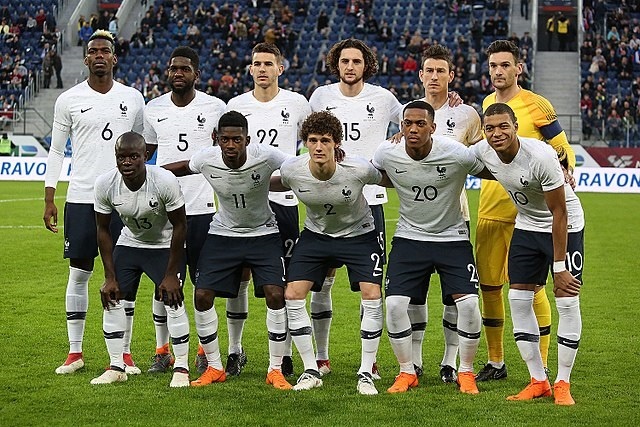 France lining up before a friendly against Russia in 2018. (Wikipedia) Photo license: CC BY-SA 3.0

(Seychelles News Agency) - The curtain on the FIFA World Cup will close on Sunday with the final match pitting Croatia against France at the Luzhniki Stadium in Moscow.

The final with kick-off at 7 p.m. local time in Seychelles.

SNA took to the capital city of Victoria to get the views and predictions of football fans for the finals.

“It's been a fantastic journey. We got further than anyone else could think we would have. Some might call it luck, but we played a really good football throughout," Aubrey Vidot, who is a fan of France, told SNA.

France has the advantage of a day's more rest than their opponent after they reached the final for the third time in their history on Tuesday. The French side won the cup in 1998 on home soil defeating Brazil 3-0.

Another supporter of the French side, Sandra Valmont, said that: “France is going to win the cup. It is important that we win it, but we should not underestimate Croatia, and what they can bring to the table.”

She predicted that at the final whistle the score will be 2-0 in favour of France.

For Croatia, this is the first time the team reaches the final. The Croats made it to the semi-final in 1998 and lost 2-1 against the same team they will be facing on Sunday.

Although no one had predicted the team arriving in the final, a few locals are giving their support.

“Although my team, Germany, did not get past the pool match, I am rooting for Croatia. It is not a popular team in Seychelles, but it will be good to see a new team going home with the cup,” said Jihad Joubert. “I think the end result will be 1-0 in favour of Croatia.”

A country with a population of four million, Croatia has surpassed expectations by beating England in the semifinal and crushing the English hope of reaching a World Cup final since 1966.

Graham Gedeon said that although France has a good defence, Croatia has a good offence and good strategy as a team, which can make the match end in its favour.

For football fans in Seychelles, an archipelago in the western Indian Ocean, the World Cup had turned into a type of holiday celebration, with cars, offices and houses decorated with flags of their favourite team.

The tournament in Russia involved 32 national teams playing a total of 64 matches in 12 venues.