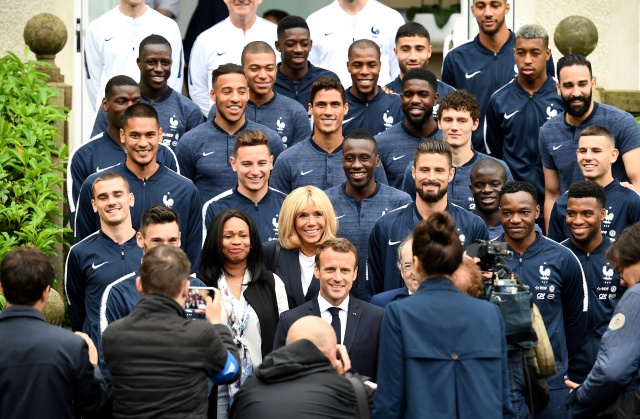 (AFP) - Victorious France were set to return to a heroes' welcome on Monday after winning the World Cup for the second time with a rollercoaster 4-2 victory over Croatia which set off chaotic celebrations at home.

Teenager Kylian Mbappe applied the coup de grace in Moscow as France, aided by an own goal and the video assistant referee, overcame determined opponents in one of the most compelling finals of the modern era.

Mbappe, just 19, scored France's sizzling fourth goal and was voted the best young player of a tournament in which he has shown he is a superstar in the making.

The triumph also put Didier Deschamps, who captained the side to victory on home soil in 1998, alongside Mario Zagallo and Franz Beckenbauer as only the third man to win the World Cup as a player and coach.

French President Emmanuel Macron, who cheered every goal in Moscow's Luzhniki Stadium, was drenched by torrential rain during the trophy presentation and attempted to "dab" with the players in the changing room.

On Monday, Macron will welcome the team back to Paris and the players will make a bus parade up the Champs-Elysees avenue, where they are expected to be feted by hundreds of thousands of people.

Fans in France celebrated into the night, honking car horns and flying the tricolour flag while the Eiffel Tower was lit up in blue, white and red. However, youths also looted a Champs-Elysees store and police fired tear gas as celebrations got out of control.

Deschamps, who was soaked by champagne by his overjoyed players in a chaotic press conference, said the win was "just as big and just as beautiful" as the 1998 triumph.

"There are two things that matter -- one is that these 23 players are now together for life, whatever happens, and also that from now on they will not be the same again, because they are world champions," he said.

"To be champions of the world as professional footballers, there is nothing better."

The breathless victory under stormy skies meant his side -- a balance of youthful vitality and big-tournament experience -- have buried the pain of their defeat in the Euro 2016 final in Paris.

"We did something incredible, we made history and we are going to enjoy it," said Antoine Griezmann, who scored France's second goal from the spot.

For Croatia, a country of just four million people, the loss was bitter but their fans took solace in the best run in the nation's history, which featured a stunning win against Argentina and a semi-final victory against England.

Croatia playmaker Luka Modric was voted player of the tournament, Belgium's Thibaut Courtois was named the best goalkeeper and Harry Kane of England won the Golden Boot as top-scorer with six goals.

US President Donald Trump tweeted congratulations to France for their "extraordinary soccer" and also praised Russia's President Vladimir Putin for his hosting of the tournament, which he described as "one of the best ever".

Putin said Russia could be "proud" of its organisation of the event, adding that foreign visitors holding World Cup fan ID cards could have visa-free entry for the rest of 2018.

France scored first when Mario Mandzukic headed into his own net following a Griezmann free-kick in the 18th minute -- the first own goal in World Cup final history.

As thunder rolled around the stadium, Griezmann held his nerve to stroke his spot-kick into the net as goalkeeper Danijel Subasic went the wrong way.

Croatia were unbowed as they ran the game from midfield, with Modric and Ivan Rakitic pulling the strings as roars of "Croatia" rang out.

But Paul Pogba and then Mbappe both struck from outside the area to make it 4-1, before Mandzukic forced a humiliating mistake from France goalkeeper Hugo Lloris to raise faint hopes of a late comeback.

Croatia coach Zlatko Dalic said his side's luck had run out after the VAR penalty.

"I never comment on referees but in a World Cup final you do not give such a penalty," said Dalic, whose team had to battle through extra-time in all three of their knockout games before the final.

But he added: "You should never give up, never stop believing. At 4-1 down I was not defeated. Overall, Croatia played a great tournament and showed its strength and quality."

Disappointed but proud Croatian fans in Zagreb cheered their team to the very end, lighting flares and firecrackers in the capital's packed main square at the final whistle.