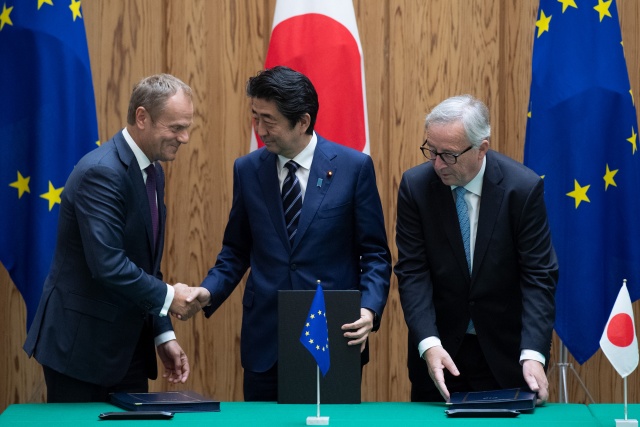 (AFP) - The EU and Japan signed a sweeping free trade deal Tuesday that officials called a "clear message" against protectionism, as Washington imposes controversial tariffs and threatens a trade war.

The deal signed in Tokyo by the EU's top officials and Japan's Prime Minister Shinzo Abe is the biggest ever negotiated by the EU and creates a free trade zone covering nearly a third of the world's GDP.

"We are sending a clear message that we stand together against protectionism," EU Council President Donald Tusk said.

"Together we are making -- by signing this agreement -- a statement about free and fair trade, we are showing that we are stronger and better off when we work together," added Commission head Jean-Claude Juncker.

Both the EU and Japan have been hit with new US tariffs despite their longstanding alliances with Washington.

Juncker said the deal sent a message that "trade is about more than tariffs and barriers, it is about values".

"There is no protection in protectionism," he said.

Abe, standing alongside the two EU officials, said the agreement, "shows the world the unshaken political will of Japan and the EU to lead the world as the champions of free trade at a time when protectionism has spread".