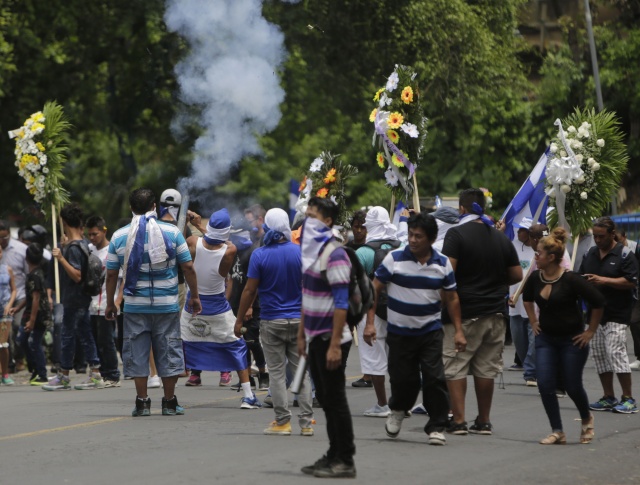 Masaya, Nicaragua | AFP | Tuesday 7/18/2018 - 02:47 UTC+4 | 783 words
Friends and relatives demonstrate during the funeral of the student Gerald Velazquez, shot dead during clashes with riot police in a church near the National Autonomous University of Nicaragua (UNAN),in Managua, on July 16, 2018.
Government forces in Nicaragua on Saturday shot dead two young men at a protest site in a church, the clergy said, on the third day of nationwide demonstrations against President Daniel Ortega, a former revolutionary hero now accused of authoritarianism. (INTI OCON / AFP)

(AFP) - Forces loyal to Nicaraguan President Daniel Ortega staged an organized attack on an opposition stronghold on Tuesday, as international calls mounted for an end to months of deadly violence in the Central American country.

The offensive on the city of Masaya came on the heels of a bloody siege of student protesters holed up in a church in the capital Managua on the weekend, suggesting Ortega was intensifying the use of lethal force to quell dissent. His government says it is carrying out a "liberation" of towns and cities where protesters have been active.

Police and masked paramilitary units toting assault rifles on Tuesday sealed off all roads leading to Masaya's flashpoint neighborhood of Monimbo, from which gunfire could be heard. Videos posted on social media showed rebels inside Monimbo firing back, some with homemade mortars.

The head of the Nicaraguan Center for Human Rights, Vilma Nunez, said at least two people were killed -- an adult woman and a police officer.

State media confirmed the death of the policeman but gave no other toll from the assault.

A group of journalists, including AFP, which tried to enter Monimbo to verify the situation were shot at by pro-government gunmen to prevent them approaching.

"They're attacking us from various entry points in Monimbo," Cristian Fajardo, a leader of a student protest movement, said in a WhatsApp message.

"They're attacking Monimbo! The bullets are reaching the Maria Magdalena parish church, where the priest is sheltered," archbishop Silvio Baez wrote on Twitter.

"May Daniel Ortega stop the massacre! People of Monimbo I beg you, save yourselves!"

The US warned Ortega against pursuing the assault on Masaya. It called for a halt to the deadly crackdown on anti-government protests that has left some 280 people dead over the past three months.

"Continued gov't-instigated violence and bloodshed in #Nicaragua must end immediately. The world is watching."

"They are shooting at houses in an irresponsible way. The message is that anyone who pops their head out will be killed: it's a message of terror," said Alvaro Leiva, secretary of the Nicaraguan Human Rights Association (ANPDH).

The operation follows a violent week in Nicaragua in which students and opposition groups calling for Ortega's ouster came under attack several times amidst widespread civil action.

Ten days ago, at least 14 people died -- four of them police or paramilitaries -- after a raid by pro-government forces in the areas of Diriamba and Jinotepe, near Masaya.

Last week, five people -- four of them police officers -- died in clashes between opposition supporters and police backed by paramilitaries in the southeast town of Morrito while another operation by Ortega loyalists ended with at least 10 dead -- including four police -- on Sunday in Masaya.

On Monday, United Nations Secretary General Antonio Guterres urged an end to the violence and a resumption of the stalled dialogue with the opposition.

In Brussels, Paul Oquist -- Nicaragua's minister for national policies and one of the cabinet members closest to Ortega -- told AFP in an interview on Tuesday that an attempted "coup" had been defeated.

"That is very good news because what it leaves then is dialogue, because the coup plotters did not want dialogue," Oquist said.

The government launched its "clean-up" operation in Masaya this month in a bid to break through barriers of piled bricks and clear opposition activists from the streets.

The deadly clashes erupted on April 18, initially against a now-ditched pension reform.

That ignited long-simmering resentment against the veteran leader and his wife, Vice President Rosario Murillo.

The bloodshed caused business support for Ortega to evaporate, and the influential Catholic Church stepped in, attempting to mediate a peaceful solution.

The Vatican's representative in Nicaragua, Stanislaw Waldemar Sommertag, on Tuesday called for an immediate truce and a return to dialogue.

The opposition insists Ortega resign. It has called for elections scheduled for 2021 to be brought forward to next year.

A former guerrilla leader, Ortega has been in power since 2007 following an earlier 11-year span as leader after the 1979 overthrow of US-backed dictator Anastasio Somoza.

The 72-year-old president has dismissed the opposition demands, and doubled down on using force to get his way.