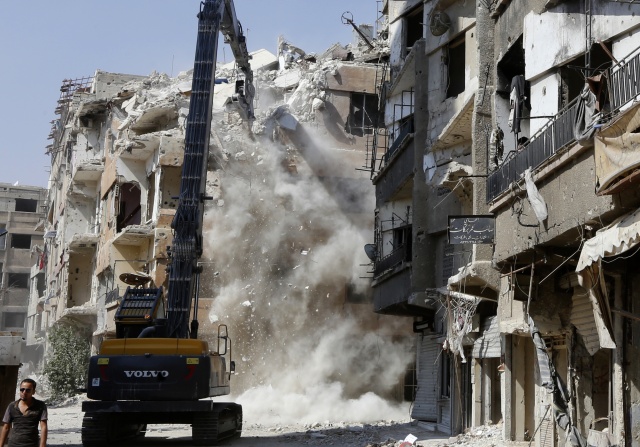 A man walks amid the rubble of destroyed buildings being removed by a bulldozer in Harasta, on the outskirt of the Syrian capital Damascus on July 15, 2018. After a blistering weeks-long assault, Syria's government recaptured the town of Harasta in March, and displaced families have been trickling back to check if their homes survived. (LOUAI BESHARA / AFP)

(AFP) - France and Russia will jointly deliver humanitarian aid to the former Syrian rebel enclave of Eastern Ghouta, the French Presidency said in a statement with Russia on Friday.

A Russian cargo plane arrived late Friday in Chateauroux in central France to load 50 tons of medical equipment and essential goods provided by France, said an AFP videographer at the scene, to be transported to the former rebel area which was recaptured by Syrian troops this spring.

Undertaken as part of a UN Security Council resolution, "the aim of this project is to enable civilian populations better access to aid," the joint statement said.

The French foreign ministry said that the cargo plane would take off from Chateauroux later in the evening and head towards Russia's Hmeimim air base in the west of Syria.

It will be the first joint humanitarian aid operation between Russia and a western country.

The aid will be distributed on Saturday under the supervision of the UN's Office for the Coordination of Humanitarian Aid (OCHA).

"Humanitarian assistance is an absolute priority and must be distributed in accordance with principles of humanity, neutrality, impartiality and independence across all Syrian territory without exception, where international humanitarian law must be fully respected," the joint statement said.

France had secured "guarantees" from Russia that the Syrian regime would not obstruct the distribution of the aid, and that it would not be misappropriated or diverted for political purposes, the foreign ministry said.

Damascus regained control of Eastern Ghouta, a rebel enclave on the outskirts of the Syrian capital, in April, ending a five-year siege.

More than 1,700 civilians were killed during the Syrian regime's operation there in March and April. According to the Russian military, more than 160,000 people, both military and civilians, were evacuated from the region.