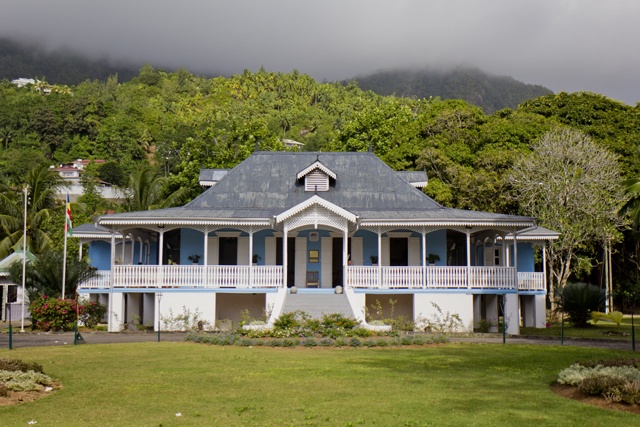 The Creole and craft village at Au Cap in the southeast of the main island of Mahe. (Salifa Karapetyan, Seychelles News Agency)

(Seychelles News Agency) - The Domaine de Val des Près is ready to give visitors a true experience of the culture and heritage of Seychelles after undergoing major renovation and refurbishment.

The Creole and craft village at Au Cap in the southeast of the main island of Mahe is one of the three heritage sites managed by the Seychelles Heritage Foundation.

The village comprises of the last authentic traditional creole homestead on the islands as well as the Pomme Cannelle restaurant – a traditional plantation house – and several kiosks selling arts and crafts from Seychelles - a group of 115 islands in the western Indian Ocean.

The jewel of the village is the Grann Kaz, a beauty showcasing craftsmanship and carpentry with its wooden carved balustrades – a reminiscence of the grand blanc era.

The chief executive of the Seychelles Heritage Foundation, Benjamine Rose, told SNA last week that revamping the Creole village is part of the foundation’s strategic plan.

“We have a five-year development plan approved by the cabinet of ministers. We have started with our main infrastructures as well as the general landscaping so that it showcases the traditional way of life. In the main house, visitors can see our traditional furniture including a Pollack gramophone and an old John Brimsmeade piano. The restaurant offers authentic Creole produce and on sale at our kiosks crafts and arts which visitors can buy. Most of these souvenirs are made on site.”

Rose said that the renovation of the Domaine de Val des Près was well overdue. “Our buildings were old and renovation and refurbishment was a must. The brightly painted kiosks are much more attractive.”

Rose said that the second phase of the plan is to build extra attractions for visitors. “We have plans to turn the basement of the Grann Kaz into a museum, with traditional artefacts. We also plan to display patchouli amongst other plants, as this area was a big plantation, which back then contributed a lot to the country’s economy. Space will be dedicated to our local artists to display their works and objects.” A traditional and medicinal garden is also being developed, as well as a tortoise pen and other domestic animals as an attraction for children.

The plantation house is described as a bewildering beauty. It stands on what was once known as the St Roch Estate where coconuts and cinnamon were grown. A cinnamon distillery made essential oil for the export market.

This gigantic house of timber was originally built in the 1870s when property owners built homes that reflected their status and prosperity. It epitomized the typical plantation house that was once common in the tropical islands of the French and British colonies.

Although it was extensively renovated and refurbished in the course of which modifications were necessary, the house has retained all the traditional aspects of the colonial plantation house: the pitched roof, with finials and prickets, the dormer windows and garrets, the wide verandah that encompasses the entire quadrilateral structure of the building, and of course the obligatory masonry plinths on which it rests.

Cindy Moka, the senior project officer at the Seychelles Heritage Foundation, said that “the Creole village offers visitors an opportunity to relive the islanders’ way of life, gone but not forgotten. This area with its surrounding plantations of patchouli, coconut and cinnamon was once a pillar of the Seychelles economy and contributed to the country’s development at that time.”

Moka said that the Foundation seeks to as much as possible to preserve the way of life back then. “At the back of the house, there is a replica of the servant’s dwelling house, which we named lakaz Rosa “Rosa’s house”, built of timber on squat stone pillars, it is a modest structure in which the servant slept.  The wooden walls are entirely covered with pages of newspapers and magazines including the photograph of the Royal family of Windsor,” explained Moka.

The chief executive said that “we are now starting to work on the branding of Domaine de Val des Près, so that the name, as well as its products, in the form of memorabilia will be known locally as well as internationally.”

The Domaine de Val des Près was inaugurated in October 1988 by former President James Michel who was then Minister. The opening coincided with the 3rd Creole Festival -- a manifestation of the Creole people way of life, culture, music and gastronomy.

It was in 1926 that John Thomas Bradley who was the chief medical officer of health in Seychelles gave the house as a wedding present to his daughter Dolly Bradley who in 1920 had married Douglas Bailey - a wealthy Anglican and fervent supporter of the Anglican Church in Seychelles.

In the 1950s, Bailey bought another plantation house, known today as the International Creole Institute. The couple is known to have made generous donations towards the construction of many Anglican churches in the island nation. In 1969, the British colonial government bought the properties.