UAE ordered by UN court to protect rights of Qataris 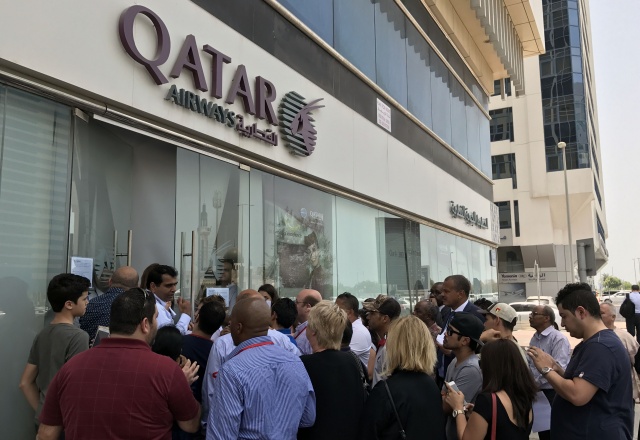 People gather outside a branch of Qatar Airways in the United Arab Emirate of Abu Dhabi on June 6, 2017. A ban on Qatari flights imposed by Saudi Arabia and its allies took effect as first efforts were made to resolve the biggest feud to hit the Arab world in years. Saudi Arabia and allies including Egypt, the United Arab Emirates and Bahrain cut diplomatic ties with Qatar on Monday, accusing the Gulf state of supporting extremism. (Ali KHALIL / AFP)

Judges at the International Court of Justice (ICJ) in The Hague narrowly ruled in a provisional but binding decision that the UAE must allow families which include Qatari members, to be reunited, and that Qatari students must be given the chance to complete their education in the Emirates.

Saudi Arabia, Bahrain, the UAE and other allies severed ties with Qatar on June 7, 2017, accusing Doha of backing terrorism. Qatari nationals living in the UAE were officially given just 14 days to leave the country.

But Doha denies the accusations, and last month appealed to the ICJ to impose emergency measures against the UAE to protect its citizens. It has also accused Abu Dhabi of breaking the 1965 International Convention on the Elimination of All Forms of Racial Discrimination (CERD).

In a hearing in late June, Qatar alleged that the United Arab Emirates was spreading a "climate of fear" among Qataris living there, splitting families and causing "substantial pain" during the year-long blockade.

On Monday, the court's judges found in Doha's favour, ruling the measures imposed by the UAE risked causing "irreparable harm" to Qatari citizens.

The judges voted by eight votes in favour of a series of provisional measures -- with seven judges against -- that the UAE "must ensure that families, that include a Qatari, separated by the measures adopted by the United Arab Emirates ... are reunited," said presiding judge Abdulqawi Ahmed Yusuf.

Qatar welcomed Monday's ruling, with foreign ministry spokesman Ahmed bin Saeed al-Rumaihi saying in a tweet that his country "was not seeking to escalate the dispute with the Emirates, but to repair the prejudice imposed on its citizens".

The move into the international courts came a year after the severing of ties and the imposition of punitive measures by Gulf countries accusing Doha of backing terrorism.

Other measures included banning Qatar Airways from their airspace and closing the country's only land border, with Saudi Arabia.

The UAE had insisted the ICJ had no authority to hear Qatar's case and stressed the situation for Qataris living in the country today is different from a year ago.

In a statement, the UAE highlighted that the court's decision involved only "provisional measures" and that "the court indicated certain measures with which the UAE is already in compliance".

"Instead of these unproductive manoeuvers, Qatar should be engaging with the legitimate concerns of the UAE and the other three states that have ended relations with Qatar regarding its continuing support for terrorism and its efforts to destabilise the region," it added in a statement quoted by the Emirates WAM news agency.

In a separate twist, Bahrain, Egypt and the United Arab Emirates earlier this month also turned to the ICJ, asking that it quash a decision in Qatar's favour, handed down by the UN's global civil aviation body.

The International Civil Aviation Organization (ICAO) ruled in late June that it had the jurisdiction to determine a dispute brought by Qatar, accusing its neighbours of violating an agreement that regulates the free passage of passenger planes through foreign airspace.

But Qatar's three neighbours want the ICJ, set up in 1946 to rule in disputes against states, to nullify the ICAO's ruling, saying its decision was "manifestly flawed and in violation of fundamental principles of due process and the right to be heard".

Diplomatic efforts have so far proved powerless to resolve the crisis which has rendered the six-nation Gulf Cooperation Council practically obsolete.