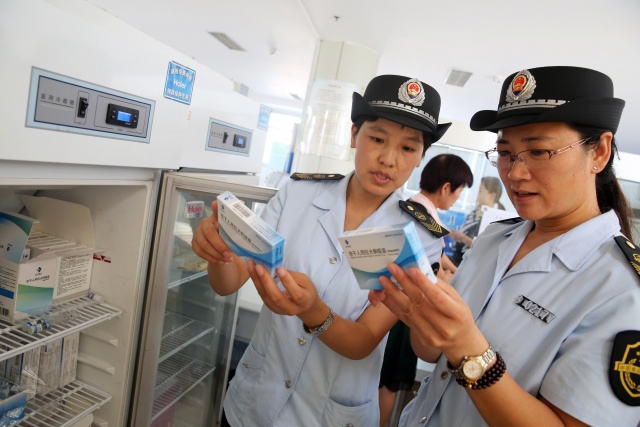 Food and Drug Administration officials check on vaccines for rabies at the Disease Control and Prevention Center in Huaibei in China's eastern Anhui province on July 24, 2018. Chinese authorities are scrambling to defuse public outrage over a safety scandal involving rabies vaccines, just one of a string of food and drug scares to hit the country in recent years.(AFP)

(AFP) - Chinese authorities have arrested 15 people including the chairwoman of a rabies vaccine producer under fire for fraudulent quality control in the country's latest drug-safety scandal.

News that pharmaceutical manufacturer Changchun Changsheng Biotechnology had fabricated records and was ordered to cease production of rabies vaccines has revived deep consumer unease over product safety in the country, fuelled by recurring scandals over the years.

Authorities in the northeastern city of Changchun, where the company is based, have arrested 15 people including the company's chairwoman on "suspicion of criminal offences", city police announced late on Tuesday.

The announcement did not give the chairwoman's full name but she has previously been identified as Gao Junfang.

The affair has shattered already fragile trust in regulators and spotlighted the frustrations of China's increasingly sophisticated consumers, who took to social media en masse to vent their anger over the case.

The China Food and Drug Administration (CFDA) said last week the problematic rabies vaccine had not left Changsheng's factory, but the company admitted it had shipped a separate sub-standard vaccine.

That vaccine for diphtheria, whooping cough and tetanus was found by regulators to fail quality standards, but the company revealed that it sold 250,000 doses to Shandong province last year.

The problems have rekindled already deep fears over domestically made medicines and driven worried parents online to swap information on obtaining imported vaccines.

Authorities have announced a series of investigations and vowed that heads would roll.

In a sign of the high-level unease, President Xi Jinping -- on a trip to Africa -- weighed in on Monday, calling the vaccine company's actions "vile in nature and shocking", according to state media.