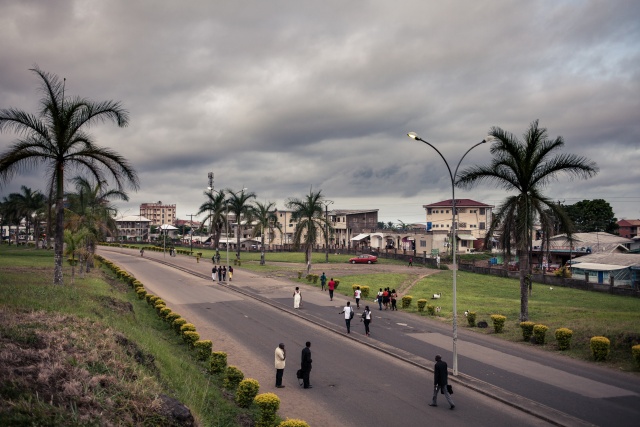 People walk by the entrance of the University of Buea, South-West Region of Cameroon, on April 27, 2018. A social crisis that began in November 2016 has turned into armed conflict since October 2017. Several small armed groups demand the independence of the two English-speaking regions of Cameroon, bordering Nigeria. (ALEXIS HUGUET / AFP)

(AFP) - The United Nations rights chief has expressed "deep alarm" at spiralling Cameroon violence, blaming the government and armed groups for a litany of abuses in anglophone regions during unrest that has displaced more than 180,000 people.

Scores of civilians have been killed in the English-speaking northwest and southwest of Cameroon in escalating violence since last year between government forces and separatists, with communities subjected to attacks, kidnappings and arson.

UN High Commissioner for Human Rights Zeid Ra'ad Al Hussein condemned violence by the separatists, but said the "heavy-handed security response that the government appears to have employed since October last year will only make matters worse for the women, children and men caught in the middle".

In a statement released on Wednesday, he highlighted reports that armed groups had carried out "kidnappings, targeted killings of police and local authorities, extortion and have torched schools".

Government forces have also been accused of "killings, the excessive use of force, burning down of houses, arbitrary detentions and torture".

The statement referred to the "structural discrimination" that fuelled 2016 protests that last year turned to unrest.

Years of resentment at perceived inequalities at the hands of the francophone majority have led to almost daily acts of violence and retribution in the region.

According to UN data, the violence has caused more than 21,000 people to flee to neighbouring countries, while 160,000 have been internally displaced, with many reportedly hiding in forests.

Cameroon's government has failed to grant UN rights officials access to the English-speaking Northwest and Southwest regions, the statement said, and urged authorities to investigate reports of abuses.

Al Hussein also raised fears for the rights situation in the far north of the country, where the Cameroonian army is deployed to counter frequent incursions by Boko Haram fighters from Nigeria.

He said he was "utterly appalled" by a video apparently showing soldiers summarily executing a woman, a child and a baby accused of belonging to Boko Haram in the region.

"The Government of Cameroon has an obligation to investigate this atrocious crime urgently. I am deeply worried that these killings captured on camera may not be isolated cases," he said.

Earlier this month, Human Rights Watch said both separatists and the government had carried out grave abuses in anglophone areas.

In a response to that report, Cameroon's government rejected allegations that its security forces had resorted to heavy-handed tactics, saying that the use of force "remains proportionate to the extent of the threat".