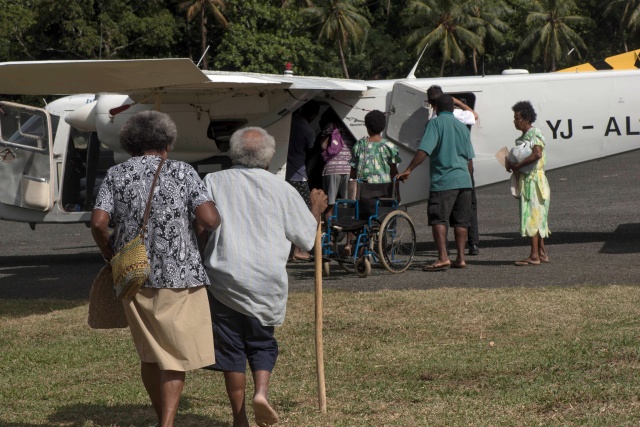 This photo taken on September 30, 2017 shows elderly people being evacuated from Vanuatu's Ambae island, where the Manaro Voui volcano is threatening a major eruption. The Vanuatu government announced last week that all 11,000 residents on Ambae -- in the north of the Pacific archipelago -- would be moved, after the Manaro Voui volcano rumbled to life and rained rock and ash on villages.
(Dan McGarry / VANUATU DAILY POST / AFP)

(AFP) - Vanuatu renewed a state of emergency on the volcano-hit island of Ambae Friday and ordered the compulsory evacuation of all residents.

A series of eruptions at the Manaro volcano that began last September intensified this week, sending a 12 kilometre (7.5 mile) column of ash spewing into the atmosphere.

The Vanuatu Meteorology and Geo-hazards department has described the volcano as a "danger to direct safety to life" and warned people to stay three kilometres from its vent.

"The local population from Ambae and from neighbouring islands will continue to hear rumbling, volcanic explosions (and) smell volcanic gases," it said.

The Red Cross reported that a thick cloud of ash had covered the Pacific island, choking crops and cutting visibility to two metres in some areas.

Foreign Minister Ralph Regenvanu said the government had decided to order the island's population to be evacuated.

"Cabinet has reimposed the state of emergency and ordered the compulsory evacuation of the entire population of Ambae," he tweeted.

The island has already undergone two evacuations since September.

In the first one, just after the volcano started rumbling, authorities scrambled to temporarily remove all 11,000 residents using ferries and small private boats.

The second evacuation in May was better organised, with thousands of people shipped to camps set up on neighbouring islands.

However, it was not compulsory and many villagers indicated they wanted to stay.

It is unclear whether the government is planning to make the latest compulsory evacuation permanent.

General » Be a reporter: Write and send your article » Subscribe for news alert
Tags: Vanuatu, volcano