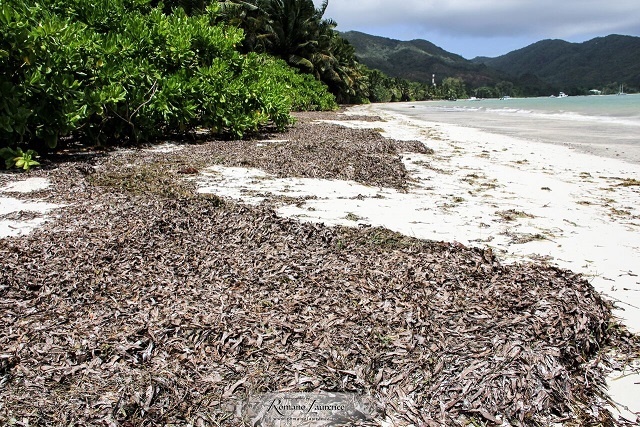 Two Seychellois entrepreneurs have a vision for the island nation's agricultural sector to only use fertilisers and soil conditioning made from seaweed. (Romano Laurence, Seychelles News Agency)

(Seychelles News Agency) - The government of Seychelles says it is making the business environment on the island nation friendlier for investors, but two Seychellois entrepreneurs say it’s not yet friendly enough.

The two entrepreneurs have a vision for the island nation's agricultural sector to only use fertilisers and soil conditioning made from seaweed. But their plan needs the support of local authorities.

Bernard and Benjamin Port Louis told SNA that they are encountering a lot of challenges to operating their seaweed factory. Bernard said that “we have a 20 million SCR ($1.5 million) investment in the form of the factory, but we have not been able to run it to its full capacity because we are still struggling to get additional space to dry out the seaweed.”

The father and son team said that the drying of the seaweed is a crucial step in its processing. Their seaweed factory, ‘Seaweed Seychelles’, is also producing pulverized cooked and dried seaweed for soil conditioning.

'Seaweed Seychelles" is located on the manmade island of Eve, just off Praslin – the second most populated island of the Seychelles – an archipelago in the western Indian Ocean.

Bernard said that since 2016, the company has written to government ministries to acquire additional land but to no avail.

“We have written to all ministries concerned, but we are still waiting to receive a response. We are discouraged as we feel we are not getting the support for this type of innovation, which is a brainchild of a Seychellois,” said Benjamin.

Bernard said that they have done all they could, and are discouraged with the lack of support. “I can say the ease of doing business in Seychelles is not for Seychellois,” adds Bernard.

“This is why I decided to come back to my country after my studies, because of this project, and my desire to do something for my motherland,” said Benjamin.

The Principal Secretary for the investment department, Michael Nalletamby, told SNA, “What I may say is that government recognizes the importance of the private sector as the principal driver of the economy and is reviewing the investment framework to make it much friendlier to do business in Seychelles.”

Nalletamby said that “the government has recently approved the Seychelles Investment Policy which aims to provide guidance to the public bodies involved in regulating business operations for policy and requirement purposes. The objective is that the result will be greater consistency among the relevant regulatory bodies in dealing with investment and business operations.”

Peter Roselie, member of the Seychelles Chamber of Commerce and Industry and who has been involved in entrepreneurship development for the past 15 years, said that it is time that the country talks about resolving issues rather than continue talking about what are the problems in the business sector.

“We need to tackle these problems. When we talk about the ease of doing business we need to look at us Seychellois and the difficulties we encounter to do business. I think not a lot of emphasis is being put on this. Whereas a lot of emphasis is put on foreign direct investment,” said Roselie.

According to the latest World Bank annual ratings, Seychelles is ranked 95th among 190 economies in the ease of doing business. The chief executive of the Seychelles Investment Board, Cindy Vidot, said that the Board is conducting market research to identify barriers to investments in the island.

“The research will cover access to finance, access to information, land, infrastructure development, re-look at procedures, investment policies amongst others indices,” said Vidot.

According to Benjamin, there are countries which have approached 'Seaweed Seychelles' and are interested in their product. “It is to be noted that we are the first in the world to extract liquid fertilizer from this type of seaweed that is the sargassum,” explained the son.

The team said that if they do not receive the necessary support from the local authorities, they will have no choice but to move abroad to do their business.

Roselie said that the “the seaweed factory is a good project because recently we saw in the news that the Chinese have developed medicines for Alzheimer from seaweed - this initiative should be supported. Entrepreneurship is all about support,” concludes Roselie.

In the meantime the Principal Secretary of department investment is optimistic  “by promulgating the investment policy, streamlining the investment procedures and establishing minimum standards for business, there will be a much easier environment in which one may start, operate and develop a business,” said Nalletamby.

Business » Be a reporter: Write and send your article » Subscribe for news alert
Tags: Seychelles Chamber of Commerce and Industry, Seychelles Investment Board