Indonesia in rescue bid for 500 hikers stranded after quake 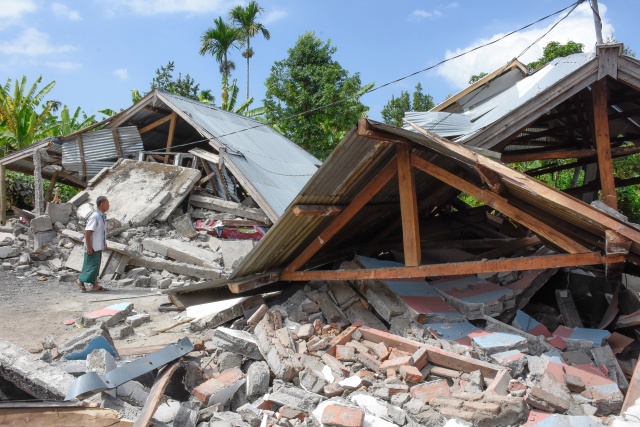 An Indonesian man examines the remains of houses, after a 6.4 magnitude earthquake struck, in Lombok on July 29, 2018. A powerful earthquake on the Indonesian tourist island of Lombok killed at least 10 people, injured dozens and damaged hundreds of homes on July 29, officials said. (Aulia AHMAD / AFP)

(AFP) - Indonesia mounted a rescue operation Monday to reach more than 500 hikers and guides stranded by landslides on an active volcano on Lombok, a day after a powerful earthquake struck the holiday island.

Helicopters and search teams have been deployed to scour the slopes of Mount Rinjani, which is crisscrossed with hiking routes popular with tourists, while rescuers have made airdrops of food supplies to those stranded.

Tonnes of rock and mud were dislodged on the mountain in the 6.4-magnitude quake, which struck early Sunday and was followed by scores of aftershocks, leaving hikers with no easy way down to safety.

"There are still 560 people trapped," said the head of Rinjani national park Sudiyono, who goes by one name.

Those believed to be stranded include citizens from the United States, France, the Netherlands, Thailand and Germany, as well as many other countries, search and rescue officials said.

Hundreds of other hikers managed to get off the mountain on Sunday, according to officials.

At least 16 people were killed in the earthquake across affected areas of Lombok, while hundreds of buildings were destroyed including a health clinic.

The quake created panic on the holiday island and sent locals and tourists running outside their homes and hotels.

The rescue operation on Mount Rinjani is likely to run until at least Tuesday and a military helicopter has dropped supplies at several spots on the mountain.

"For supplies, they can still survive for another one to two days," Agus Hendra Sanjaya, spokesman for Mataram's search and rescue agency, told AFP.

Rising some 3,726 metres (12,224 feet) above sea level, Rinjani is the second-tallest volcano in Indonesia and a favourite among sightseers keen to take in its expansive views.

Hiking trails on the mountain were closed following the quake due to fear of further landslides.

Thailand’s embassy in Jakarta said 239 of its citizens were stuck in the area surrounding the mountain.

Thai national Thanapon Worawutchainan, who was at the summit when the earthquake occurred, posted a video on Facebook showing people stumbling down the slopes in the aftermath.

He said the ground shook violently and people lay down until the tremors stopped.

"It looked like the mountain in front of me was going to collapse," another stranded Thai, Funknathee Prapasawat, said on Facebook. "Some people were injured by rocks falling off the mountain".

The epicentre of the earthquake was 50 km (30 miles) northeast of Lombok's main city Mataram, the United States Geological Survey said, far from the main tourist spots on the south and west of the island.

The initial tremor was followed by two strong secondary quakes and more than 100 aftershocks.

The jolt was felt some 100 km (60 miles) away on the bustling resort island of Bali, although there were no reports of damage there.

Some 160 people were injured in Lombok as a result of the quake, said Mohammad Rum, head of West Nusa Tenggara disaster agency.

A Malaysian was among the dead, with another six citizens injured, the foreign ministry in Kuala Lumpur said.

President Joko Widodo visited affected areas on Monday and promised financial support for those who have lost their homes.

"We must be aware that our country is in the Ring of Fire, so people need to be prepared to face any disaster," Widodo said.

Indonesia, one of the most disaster-prone nations on earth, straddles the so-called Pacific "Ring of Fire", where tectonic plates collide and a large portion of the world’s volcanic eruptions and earthquakes occur.

In 2004 a tsunami triggered by a magnitude 9.3 undersea earthquake off the coast of Sumatra in western Indonesia killed 220,000 people in countries around the Indian Ocean, including 168,000 in Indonesia.

General » Be a reporter: Write and send your article » Subscribe for news alert
Tags: Indonesia, earthquake