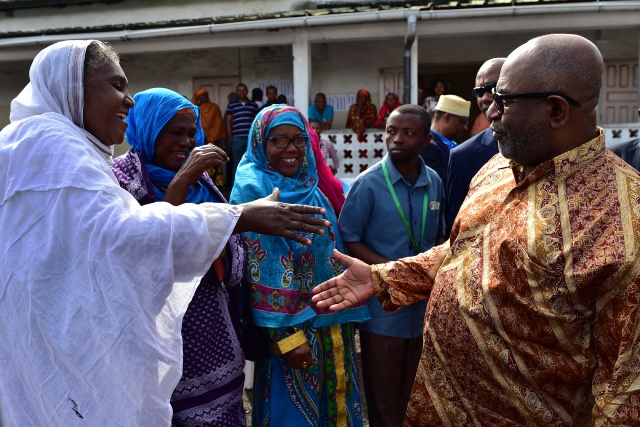 Comoros' President Azali Assoumani (R) shakes hands as he arrives to vote during a constitutional referendum on July 30, 2018 at Mitsoudje polling station, outside Moroni capital of the Comoros archipelago off Africa's east coast. Voters in the Comoros went to the polls on July 30 in a politically explosive referendum that could change the constitution and allow President Azali Assoumani to rule beyond 2021, his current term limit. (TONY KARUMBA / AFP)

(AFP) - Voters in Comoros overwhelmingly backed controversial constitutional reforms that would allow President Azali Assoumani to run for another term, an electoral official said Monday, following a referendum boycotted by the opposition.

The Indian Ocean archipelago has a long history of instability and risks renewed unrest after Assoumani banned demonstrations and the opposition called Monday's vote "illegal".

The poll was held to a backdrop of rising tensions, suggestions of ballot stuffing, and voting was interrupted by at least one violent incident.

"In the majority of polling stations visited there were fewer than 20 voters waiting to cast their ballots," Jules Hoareau, part of the Eastern Africa Standby Force observer mission, told AFP.

"But when we returned we observed a sudden flood of voting papers in the ballot box. That doesn't make any sense."

Unidentified assailants attacked the Hankounou polling station in Moroni with a knife, destroying two ballot boxes and hospitalising a policeman.

But Soilihi Ali Said, a voter in his 40s in the capital Moroni which on Monday was virtually shut down by a general strike, said he voted 'Yes' because "there's the promise of change with new faces and a state that's less bloated."

Under the constitution adopted in 2001, power rotated every five years between Comoros' three main islands as a means of balancing politics in the coup-prone country.

Following Monday's vote, that arrangement will be dropped and replaced by a president who will be elected for a five-year tenure, renewable for one term.

Assoumani will also gain the power to scrap the country's three vice-presidencies which was another balancing measure of the previous constitution.

Islam will now be proclaimed the state religion for the first time, following the vote. Ninety-nine percent of the Comorans are Sunni Muslim.

One businessman who requested anonymity told AFP he had not voted because he "sensed a scam".

In the capital Moroni there were only a handful of posters of Assoumani's face emblazoned with slogans exhorting voters to support his reforms.

The opposition did not participate in the process and turnout appeared weak at several polling stations in the capital, AFP reporters witnessed.

But state media insisted "there was no apocalypse... the vote proceeded without any major incident".

In the run-up to the poll, one of the vice presidents, Moustoidrane Abdou escaped an assassination attempt when his car was attacked by gunmen on motorcycles.

Assoumani is now expected to stage early elections next year to extend his time in office.

He had vowed to stand down if he had lost the vote, according to his spokesman Mohamed Ismailla.

The Comoros -- a group of three islands between Mozambique and Madagascar and one of the world's poorest countries -- has endured repeated coups and political turmoil since independence from France in 1975.

Assoumani, a 59-year-old former colonel, was president between 1999 and 2002, coming to power after ousting acting president Tadjidine Ben Said Massonde in a military coup.

In May 2016, he returned again as president after an election marred by violence and allegations of voting irregularities.

In April this year, Assoumani suspended the Constitutional Court saying it was incompetent.