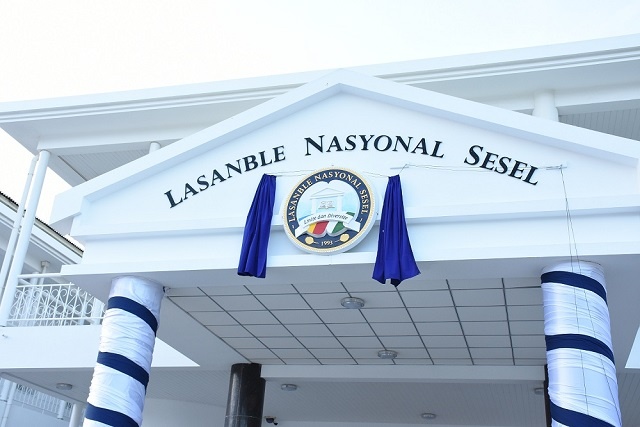 (Seychelles News Agency) - During its 25 years of existence the National Assembly has amended the Constitution nine times and "embraced a massive transformation" to transparency that has allowed Seychellois to take greater part in government, the speaker of the sixth National Assembly said at the legislative body's 25th anniversary ceremony.

Nicholas Prea predicted that the National Assembly will continue to play a key role in bringing change and modernizing democracy on the island nation.

Speaker Prea said that 25 years is not a long time but the early years of the body have seen challenges and achievements.

“Some of us present here will look back over the years and will remember the difficulties we had to overcome and will appreciate the progress as well,” Prea said at the Monday ceremony.

“Many laws have been passed and amended again to cope with changes taking place. The Constitution has been amended nine times and hundreds of questions have been asked and motions have sought answers and results to improve the lives of our people,” said Prea.

Prea added that “the new assembly has embraced a massive transformation moving to full openness and transparency, involving members of the public in debates and taking the executive to task.”

The first National Assembly of Seychelles was elected in 1993 after the first legislative election took place. The composition of the house were made of three political parties, namely the Seychelles People’s Progressive front (SPPF), with 27 members, United Opposition (UO), with one, and the Democratic Party (DP), with 5 members.

One of the oldest serving members of the National Assembly, Charles Decommarmond, said that he has travelled a great journey with the assembly.

“I have learnt a lot with the assembly since I was here from day one when the first National Assembly came into being. I have been elected for five consecutive terms. I can say that almost all my career has been into politics and serving in the assembly,” said Decommarmond.

Decommarmond, who is also currently the Leader of Government Business, said that at first it was not easy starting from scratch and “when I look back we have come a long way and we are more determine to move forward in the spirit of togetherness.”

Asked what has been some of the greatest laws passed in the assembly, Decommarmond said that all legislatures have one way or another brought significant benefit for the people of Seychelles.

“We are here to work and bring what is best for the people. Even some old laws such as the Civil Code are being brought back to the table for discussions. All that is done in goodwill and to adapt with changes occurring,” said Decommarmond.

The speaker of the first National Assembly, Justice Francis MacGregor, recounted his experience with the institution which he described as a tough learning curve.

“I recall one member telling me “if you last for one year, you are the man,” said MacGregor. MacGregor described the development of the National Assembly as a revolution from a larger majority of members coming from the government party to now having representatives of the ruling party as  the minority.
In the last election for the National Assembly, in 2016, the opposition won for the first time the majority of seats -- 19 out of the 33 -- putting Seychelles, an archipelago in the western Indian Ocean, in a position of cohabitation.

MacGregor said that despite of the challenges such as lack of financial autonomy, he shared some great memories along the way.

“Some of them include appreciating lively debates, meeting other international speakers, and gradually seeing members learning dialogue and tolerance with differing views,” said MacGregor.

Since its existence the National Assembly has went through some watershed moments such as the unexpected dissolution of the assembly in July 2011. The dissolution was temporarily invalidated by the Constitutional Court based on procedural grounds. The election was boycotted by all the main opposition parties. As a result, the People’s party – the party in power at that time -- won all 31 seats in the assembly.

Another surprise event was the sudden resignation of former speaker Patrick Pillay in January this year. He was also the elected member of the electoral area of Anse Boileau, a southern Mahe district.

Pillay became the third speaker of the assembly in September 2016 - the first one who did not come from the ruling party. Pillay replaced Patrick Herminie, who occupied the post for the past decade.