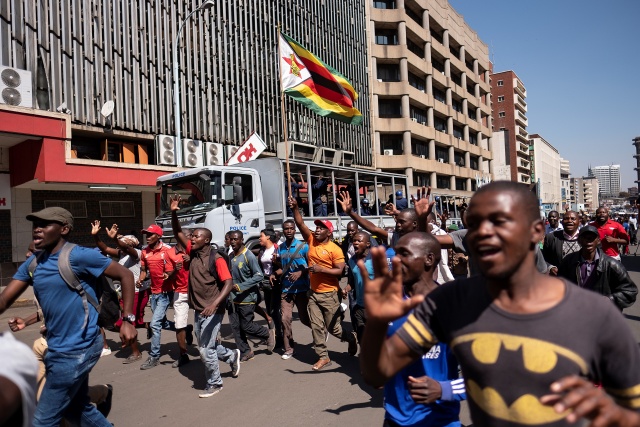 Supporters of Zimbabwean opposition leader Nelson Chamisa celebrate as they gather outside the Opposition Movement for Democratic Change (MDC) headquarters in Harare, on August 1, 2018. Zimbabwe's ruling ZANU-PF party wins the most seats in parliament, according to official results, as the count continues in the country's presidential race and the opposition MDC cries foul, alleging widespread fraud. (MARCO LONGARI / AFP)

(AFP) - Zimbabwe's ruling ZANU-PF party won the most seats in parliament, official results showed Wednesday, as the opposition MDC protested against alleged widespread fraud and the count continued in the key presidential race.

The parliamentary results strengthened the chances of President Emmerson Mnangagwa holding power, but triggered MDC demonstrations in Harare and fears of clashes between angry opposition supporters and the government.

EU observers are due to give their preliminary report on Zimbabwe's election later Wednesday, two days after its first ballot since Robert Mugabe was ousted by the military after 37 years in power.

With elections under Mugabe marred by fraud and often deadly violence, his successor Mnangagwa, 75, had promised a free and fair vote and invited international observers.

The Zimbabwe Electoral Commission (ZEC) said of 210 parliamentary seats, 153 had been counted with ZANU-PF winning 110 and the MDC Alliance 41.

Several hundred MDC (Movement for Democratic Change) supporters gathered outside the party headquarters in Harare, chanting and shouting that they had won the elections.

"The results are biased, trying to give the impression that ZANU has won," said Lawrence Maguranyi, 21, an MDC supporter and university student.

The MDC did not immediately respond to the parliamentary figures but its presidential contender Nelson Chamisa, 40, said the presidential results were being faked.

"ZEC seeks to... reverse the people's presidential election victory. The strategy is meant to prepare Zim mentally to accept fake presidential results," he tweeted. "We won the popular vote and will defend it!"

- Call to refrain from violence -

The regional SADC bloc, in its preliminary report, said on Wednesday that the campaign and election had "proceeded in a peaceful and orderly manner and were largely in line" in Zimbabwean law.

It called for any aggrieved candidates to "refrain from any form of violence".

If no presidential candidate wins at least 50 percent of the ballots cast in the first round, a run-off vote is scheduled for September 8.

The electoral commission had warned that final results of the presidential first round may not be known until Friday or even Saturday.

But it said partial presidential results could be announced later Wednesday.

"We are working flat-out," commission chairwoman Priscilla Chigumba told journalists in the capital.

Analysts have said it was unclear whether the country's generals who ousted Mugabe and ushered Mnangagwa into office would allow an MDC victory.

"There is no way that ZANU-PF will accept an MDC victory. We know that people will be beaten -- especially in rural areas, like what they were doing before," said Harare shop worker Tracy Kubara, 26.

Mugabe, 94, who ruled for nearly four decades, voted in Harare alongside his wife Grace.

It followed a surprise press conference at which he stunned observers by calling for voters to reject ZANU-PF, his former party.

But Chamisa, a lawyer and pastor who performed strongly on the campaign trail, sought to tap into the youth and urban vote.

He has repeatedly accused ZANU-PF and election authorities of trying to use a flawed electoral register and fixed ballot papers to steal the election.

Whoever wins will face a mass unemployment crisis and an economy shattered by the Mugabe-era seizure of white-owned farms, the collapse of agriculture, hyperinflation and an exodus of investment.

Mnangagwa was allegedly involved in violence and intimidation during the 2008 elections when then opposition leader Morgan Tsvangirai pulled out of the run-off after attacks claimed the lives of at least 200 of his supporters.

Africa » Be a reporter: Write and send your article » Subscribe for news alert
Tags: Zimbabwe, Vote