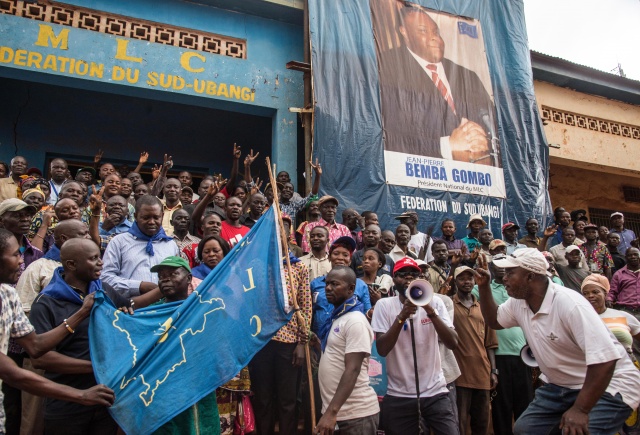 Supporters of former war chief and ex-vice president Jean-Pierre Bemba and his party 'Mouvement de liberation du Congo' (MLC) gather in front of the party's office in Gemena, Democratic Republic of Congo, on July 30, 2018, as he is expected to return to the country after an 11-year absence ahead of December polls. Bemba, 55, was acquitted in June 2018 of war-crimes charges in The Hague. He has vowed to return to Kinshasa on August 1 to file his election bid. Candidates must physically be in the country to lodge their applications. His party previously said that he would arrive in Gemena, a town in his stronghold of the northwest, on July 31. But on July 30 it said he had not had flight authorisation for landing there.
(Junior D. KANNAH / AFP)

(AFP) - After more than 11 years abroad -- a decade of it behind bars -- former DR Congo warlord Jean-Pierre Bemba made a triumphant return home on Wednesday in front of tens of thousands supporters and police firing teargas, reflecting the country's high-voltage political mood.

Bemba, throwing down the gauntlet to his rival President Joseph Kabila, has vowed to contest twice-delayed elections due to take place on December 23.

He landed at Kinshasa from Belgium aboard a private plane after the International Criminal Court (ICC) acquitted him of war-crimes charges in June.

"Bemba is the leader of the Congo, he knows exactly what to do for his Congolese brothers," said Jean-Bertrand Ngondo, among cheering supporters at the capital's Ndjili airport.

Crowds of people, many of them chanting anti-Kabila slogans, also gathered along the city's main highway, prompting police to fire teargas to try to make a path for his open-topped Mercedes, an AFP reporter saw.

The huge numbers greeting Bemba, 55, is the largest politically-related gathering in Democratic Republic of Congo in two years, after a crackdown on protests by Kabila since 2016.

"With the return of Bemba, it is time for Kabila to go. He has made us suffer a lot," said Mado, a vegetable seller.

Police had to cordon off a major avenue that leads directly to Kabila's presidential palace, where two of Bemba's properties are also situated nearby, which led to a temporary standoff.

But after negotiations, Bemba was allowed to pass the police cordon and travel to a different family property further from the presidential palace.

Analysts say Bemba's return introduces even more uncertainty into an already volatile election. Candidates must submit their applications by August 8 and physically be in the country to do so.

The DRC has never known a peaceful transition of power since it gained independence from Belgium in 1960 -- and some experts fear the current crisis may spiral into bloodshed.

Two wars unfolded from 1996-97 and from 1998-2003 that sucked in other countries in central and southern Africa. Smaller, but still bloody, conflicts dog the centre and east of the vast country today.

Kabila, 47, took over from his father, Laurent-Desire Kabila, after he was assassinated by a bodyguard in 2001.

His regime has long had a reputation for corruption, inequality and unrest.

Kabila was scheduled to stand down at the end of 2016 after his second elected term, technically the last permitted under the constitution.

But he has stayed in office, invoking a constitutional clause enabling him to stay in power until a successor is elected.

He has refused to spell out whether he will seek a new term.

Dozens have died in anti-Kabila protests amid the mounting political uncertainty.

Hostility to the incumbent was clear in Wednesday's chants, such as "Kabila, take care, your term is over," "Goodbye Kabila," and "Bemba, shave off his white beard."

"The last episode in the Kabila series is unfolding today. The film's over," said a nurse who gave her name as Angelique.

Another rival to Kabila -- tycoon Moise Katumbi, 53, a former governor of the mineral-rich province of Katanga -- plans to return home on Friday from self-imposed exile abroad.

The third big opposition figure is Felix Tshisekedi of Union for Democracy and Social Progress (UPDS), which was headed by former prime minister Etienne Tshisekedi until his death last year.

Bemba was once an assistant to former dictator Mobutu Sese Seko.

In the late 1980s, he founded the Movement for the Liberation of the Congo (MLC) -- then a rebel group but now a political party -- with help from neighbouring Uganda.

In 2003, he became vice-president under a peace deal to end the fighting. Bemba's MLC had managed to overrun the country's north.

Three years later, he stood against the incumbent Kabila in presidential elections and lost the run-off. He claimed the vote was rigged.

Bemba, in turn, was accused of treason when his bodyguards clashed with the army in Kinshasa and then fled in 2007, heading to Belgium, where he spent part of his youth.

He was then arrested in Europe on a warrant by the ICC for war crimes committed by his private army in the neighbouring Central African Republic between 2002-3, when its then president, Ange-Felix Patasse, sought his help to repel a coup attempt.

He was sentenced in The Hague in 2016 to 18 years before the conviction was overturned on appeal in June. The ICC declared Bemba could not be held responsible for crimes committed by his troops.

But legal experts expect him to be released definitively if time spent behind bars is taken into account.