New chairwoman of Seychelles Electoral Commission: leadership should be based on ability 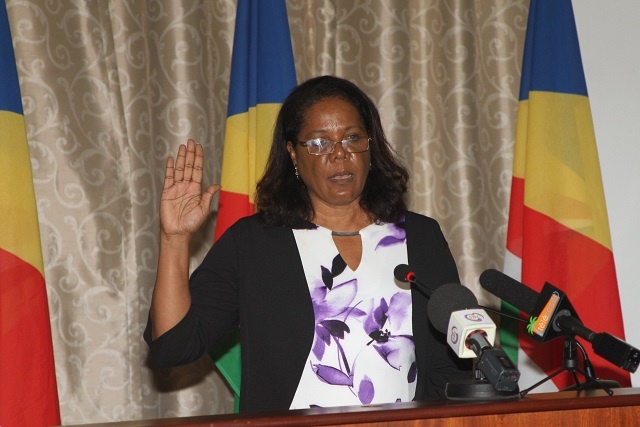 Lagrenade and other members of the Commission were sworn in on Friday at State House. (State House)

(Seychelles News Agency) - The newly appointed chairperson of the Seychelles Electoral Commission, Luciana Lagrenade, said she is proud to become the first woman to take up the post and is ready to accept the challenge.

Lagrenade and other members of the new Electoral Commission were appointed by the President of Seychelles, Danny Faure, last week following recommendations of the Constitutional Appointments Authority (CAA).

The electoral commission comprises a chairperson and six other members who are appointed for a seven-year term as per Article 115 of the constitution. All the new members were sworn in last Friday at State House in Victoria.

Speaking to the press on Friday, Lagrenade expressed her pride and joy at being the first woman to lead the commission.

“I am really proud and happy but I always believe that a position of leadership should not be gender specific but should be based on a person’s ability, willingness, and ability to take the institutions, decide on the direction and the mechanism required to take it where you want it to be,” she said.

The chairperson added that “it is a great opportunity for me and the team I lead to show that we can uphold what our constitution states and that we can carry out the responsibilities of the commission to uphold democracy in our country through transparent processes and procedures.”

The Electoral Commission is in the process of conducting a voter census to gather information as to whether the voter’s register will be updated or recreated. A total of $221,000 (SCR3 million) has been budgeted to carry out the voter census in the 25 districts of Seychelles, an archipelago in the western Indian Ocean.

According to the island’s constitution, revisions of electoral boundaries should be done based on the number of people residing in that particular area and the boundaries must be the same as far as it is practicable.

On the current voter register, around 63,000 people are eligible to vote out of the 95,000 people residing in Seychelles.

Lagrenade told SNA that for the moment she is not in a position to talk about the commission’s current work as they are yet to hold their first meeting. She added that she has plans to move the commission forward.

The Electoral Commission of Seychelles is the body that organises, oversee and regulate political elections in the island nation. It is also in charge of registering political parties in Seychelles.

The opposition coalition -- Linyon Demokratik Seselwa (LDS) -- won a majority votes including 15 out of the 25 constituencies contested in the legislative election in September 2016.