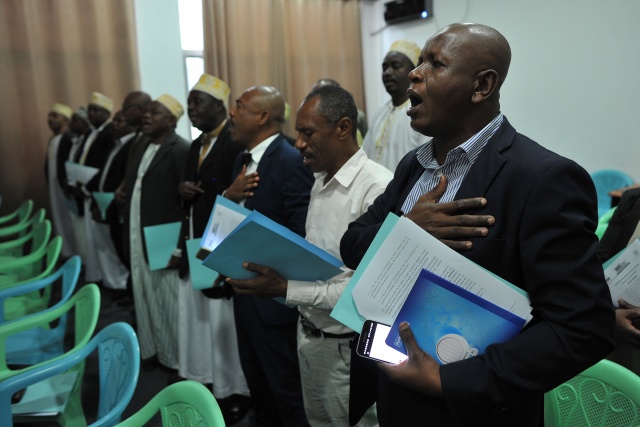 Opposition sing in unison an anthem to show their solidarity with proposals to stop a referendum read out among themselves at a press conference July 28, 2018, at parliament buildings in Moroni capital of the volcanic Comoros archipelago off Africa's east coast where an upcoming referendum on July 30 has caused political tensions as the administration of current president seeks to make wide-ranging constitutional reforms. If approved, the constitution will allow the President Azali Assoumani to run for a second consecutive term, two-years into a five-year presidential term, so that he can remain in power beyond 2021, when his currently non-renewable term would otherwise end sparking demonstrations by the opposition led by former president Ahmed Sambi, currently under house arrest by Azali's administration. (TONY KARUMBA / AFP)

(AFP) - Authorities in the Comoros have launched a crackdown on opposition members following a controversial referendum which they boycotted, party sources said Wednesday.

The July 30 referendum returned overwhelming backing for reforms that will allow President Azali Assoumani to run for another term in office at the head of the Indian Ocean archipelago.

The vote also means the three posts of vice-president and constitutional court will be scrapped.

Around 10 opponents of the government have been recently arrested while a similar number have gone into hiding as they are being sought by authorities, according to opposition sources.

Former president Ahmed Abdallah Sambi who leads Juwa, one of the main opposition parties, has been under house arrest since May.

The party's secretary-general Ahmed el-Barwane has been in detention since July 31 accused of assault, attempted murder and criminal conspiracy, according to Moudjahidi Abdoulbastoi, one of his lawyers.

"The persecution of el-Barwane is unbelievable. It is due to political views which he made very public," Abdoulbastoi told AFP.

Juwa spokesman Ahmed Abdou Chakour has also been in detention in the capital Moroni since the referendum, a party official said, speaking on condition of anonymity.

A number of Juwa activists have also been detained, the official added.

Yahaya Mohamed Iliasse of the ruling Convention for the Renewal of the Comoros (CRC) party confirmed there had been arrests.

"There are charges against them and I have confidence in the justice system," he said.

Half a dozen CRC dissidents have also gone into hiding, according to associates.

Ahead of the referendum, Interior Minister Mohamed Daoudou said opposition members would be "hunted down" after the vote.

"From Tuesday (July 31) we will hunt them down," he said. "Let them find a hole to hide in," he told a campaign rally.

The opposition had urged a boycott of the referendum, denouncing "abuses of power".

On Monday the Supreme Court confirmed the victory of the "yes" campaign with 92.43 percent of the vote on a turnout of 62.71 percent.

The Third Way Collective, a civil society group, blasted the referendum as "the most scandalous electoral masquerade in recent years".

It said voters had largely "steered clear of the ballot box" and that the opposition had been "muzzled".

Riding high on the referendum results, Assoumani last week promised to hold a presidential election as soon as the archipelago is able to afford one, probably early next year.

The Comoros -- a group of islands between Mozambique and Madagascar and one of the world's poorest countries -- has endured repeated coups and political turmoil since independence from France in 1975.

Assoumani, a 59-year-old former colonel, was president between 1999 and 2002, coming to power after a military coup.

He returned again as president in 2016 in an election marred by violence and allegations of voting irregularities.