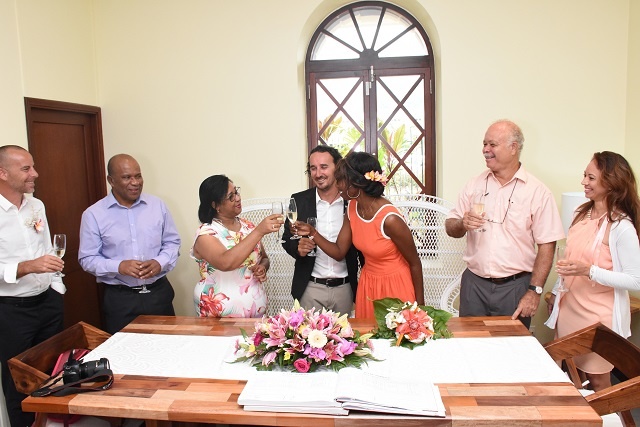 The first Civil wedding to be held at the mayor’s office in Victoria. (Jude Morel)

(Seychelles News Agency) - Civil weddings that previously were held at the Civil Status office will now take place at the mayor’s office in Victoria. The change, which took effect Thursday, was immediately followed by three marriages.

The principal civil status officer, Marietta Labrosse, said the change is taking place due to the size of the Civil Status office.

“The office at civil status is too small. The registration of births and deaths are done there. On the contrary, this place (the mayor's office) is bigger which allows couples to come with family and friends,” said Labrosse.

To mark the change in location, a memorandum of understanding was signed between the mayor of Victoria, David Andre, and the principal secretary for Immigration & Civil Status, Alain Volcere.

Andre said that mayor's office is inspiring and beautiful.

“The mayor’s office is a place where people celebrate civil weddings all over the world. When I was elected as the mayor, one of the first things that came to mind was to apply the same in Seychelles as this building is a beauty and has a lot of history,” said Andre.

“As an artist, I hope it brings something more artistic and prestigious that will bring more emotion rather than just exchange vows in an office where there are files,” said Andre.

He hopes that “this will inspire all the youth to get married surrounded by such beautiful settings.” He added that he and his team will continue to work to “embellish our space to make it even more inspiring, poetic and artistic.”

Following the signing of the understanding, the first wedding was celebrated in the building on Thursday.

The bride, Dolores Martin, born Aglae, said after her wedding ceremony that “she is happy and privileged” to be the first couple to be married at the mayor’s office.

“It is a very beautiful building which I know from my childhood and back then it was a library. It is really nice that they have made it a location for weddings because it holds a lot of history. As a Seychellois I am very proud and happy,” said Martin.

The wedding between Dolores and Arnaud Martin was one of three unions for the day.

Wedding celebrations at the mayor’s office, located along the State House Avenue, will be done on Tuesdays and Thursdays in the mornings with no cost attached. Couples wanting to celebrate their wedding at another location, regardless of the day of the week, will have to pay $110 (SCR1500).

The same fee applies on Saturdays, even if ceremonies are held at the mayor’s office as a civil status officer has to be made available.