A new way to mend the body available in Seychelles: energy healing 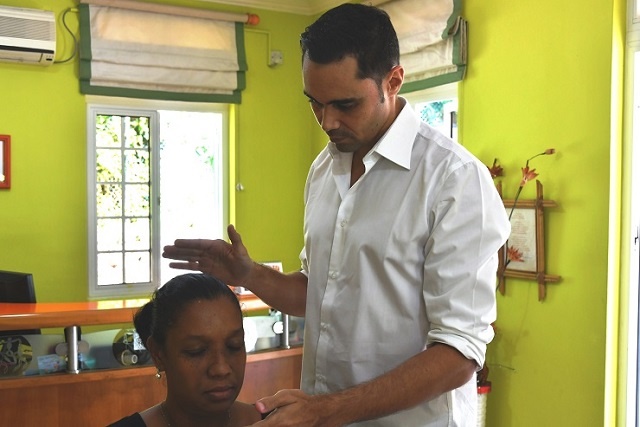 To heal using the Reiki techniques, Matile moves both his hands around the body of the patient. (Seychelles News Agency)

A Seychellois healer has been using an energy-based healing technique called Reiki to treat local patients since March this year.

Jonathan Matile is trained in Reiki, a non‐drug treatment with origins from Japan described as a vibrational or subtle energy therapy through movements of the hands above the body.

He told SNA, that “the utensils for this medicine is meditation, hands and plenty of love,” adding that he does not touch the clients and that they remain fully clothed throughout the therapy.

To heal using the Reiki techniques, Matile, almost in a trance, moves both his hands around the body of the patient. He often stops to exhale air away from the patient who sits quietly through the 30-minute session.

He said that during a session the afflicted person would feel prickly, cold, or hot in the affected areas or even some sort of ‘wind’ around their body, proof he says that the ‘healing is working’.

The complementary medicine targets all forms of dimensions of a person from the physical, mental and spiritual being, contrary to conventional medicine. A 30-minute session of energy healing costs SCR 500 rupees ($37).

Born in Seychelles, Matile who has a background in clinical and developmental psychology has practised for several years in Switzerland. He returned to his native land late last year to start his business of energy healing which was not popular in the 115-island archipelago in the western Indian Ocean.

A trained master in Reiki, Matile received his certificate from ASCA, a Foundation in Switzerland for complementary medicine. He started his practice at Docklands at the Latanier Road in the capital Victoria in March.

Other alternatives or complementary medicine practised in Seychelles include yoga and Tai-chi but Matile says more awareness needs to be done on the energy healing.

“I see a lot of people who have body pain or joint pains, but also people with an unconscious or emotional pain and they are happy to try an alternative especially if it is spiritual or natural,” he told SNA.