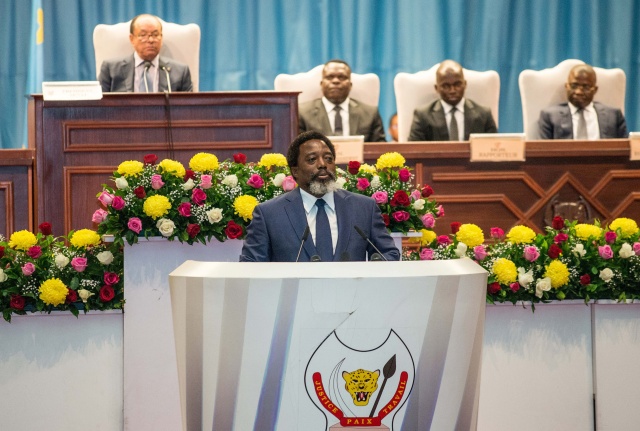 President of the Democratic Republic of Congo, Joseph Kabila delivers a state-of-the-nation speech at parliament in Kinshasa on July 19, 2018. Kabila kept his country guessing on July 19 over his political plans five months ahead of crucial elections. In a state-of-the-nation speech that had sparked intense speculation of an announcement, Kabila vowed to stand by the December 23 date for the poll, and "unequivocally respect the constitution". But, in a long speech enumerating his government's policies, Kabila did not spell out whether he would seek a new term in office. (Junior D. KANNAH / AFP)

(AFP) - The UN Security Council on Monday welcomed President Joseph Kabila's decision to not seek re-election in the Democratic Republic of Congo and said the polls must now lead to a peaceful transfer of power.

In power since 2001, Kabila last week appeared to bow to international pressure when his governing coalition picked Emmanuel Ramazani Shadary as its presidential candidate in the December 23 vote.

The council said in a statement drafted by France that it "welcomed President Joseph Kabila's respect for his commitment to abide by the Congolese constitution".

Council members said the "entire Congolese political class and the institutions responsible for organizing elections" must remain "committed to ensure the success of the rest of the electoral process, leading to a peaceful transfer of power."

The United States, France and Britain had urged Kabila to state clearly that he would not seek another term amid fears that his failure to step aside could trigger violence.

The DR Congo has never known a peaceful transition of power since independence from Belgium in 1960.

The Security Council is planning to visit the DR Congo before the elections, possibly in October.