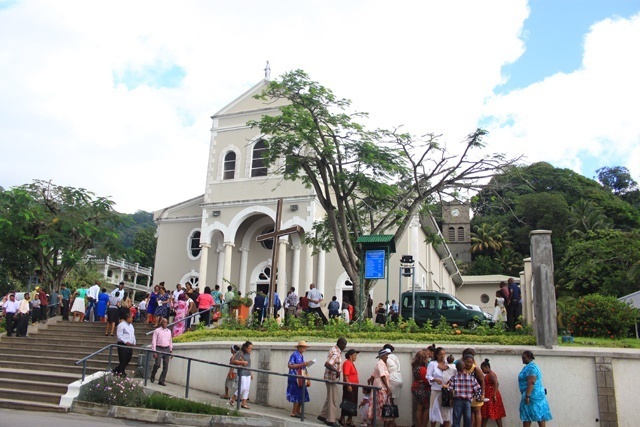 (Seychelles News Agency) - Hundreds of people from Mahe and Praslin converged on La Digue to celebrate the Feast of the Assumption of Mary, the Patron Saint of the island, on Wednesday. The celebration is one of the most important events on the Christian calendar. In Seychelles, it is a holy day and a public holiday.

In this week’s buzz, SNA presents the seven holy days throughout the year and how they are celebrated in Seychelles, a group of 115 islands in the western Indian Ocean.

Christians from the Roman Catholic Church march in prayers in the Seychelles’ capital of Victoria to commemorate the crucifixion and death of Jesus Christ at Calvary on Good Friday. The processions, known as the Way of the Cross, take place in most of the Roman Catholic parishes in the island nation.

Known as the Resurrection Day, this is a festival and holiday celebrating the resurrection of Jesus from the dead three days after his crucifixion. The Easter custom in the island nation is celebrated through prayers and a big feast on Sunday itself. Chocolates and Easter egg are shared between friends and family.

This day celebrates the real presence of the body and blood of Jesus in the Eucharist. The day usually starts with a Mass in the morning on the eighth Thursday following Easter. This is followed by the adoration of the Eucharist at every Roman Catholic parish. At the end of the Mass there is often a procession in which believers pray for those who are in need, offering continuous blessings, love and peace.

Feast of the Assumption of Mary

The feast -- popularly known as Lafet La Digue -- usually starts with a religious procession which begins at the grotto and ends at the church of St Mary for the Mass. This is followed by various entertainment and sports activities on the island. This day is observed on August 15.

Celebrated on November 1 each year, this day is a Christian festival in honour of all the saints. This day stems from the belief that there is a powerful bond between the dead and the living. At this time of the year, every cemetery on the islands is colourful with different kind of flowers as people pay homage to the dead. Additionally, most of the tombstones are given a brush of paint.

This is the mother of all celebrations on the Christian calendar as it involves the birth of Jesus Christ on December 25. At this time of the year streets are decorated with lights and Christmas trees are installed in homes and shops. Decorations are put up in November and in the Capital City of Victoria songs from local artists are played to revive the spirit of Christmas.  Gifts and Christmas card greetings are shared between friends and families, which has become a tradition over the years. Many people attend the Christmas Eve Mass otherwise known as the midnight Mass. The day simply ends up with families coming together for a huge feast and celebration.