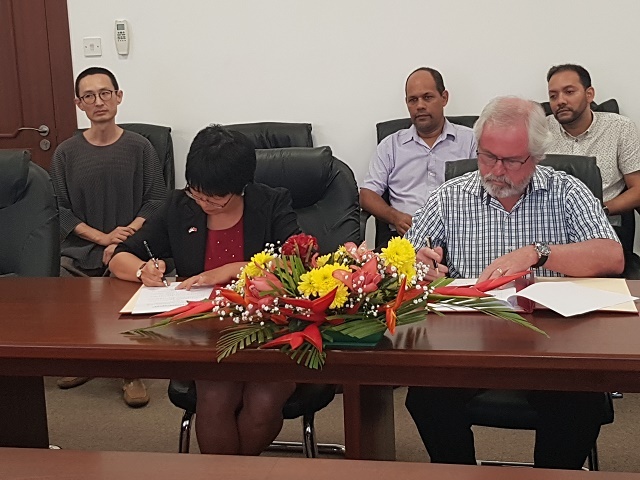 The agreement was formalised by a signing at the finance ministry’s headquarters at Liberty House in the capital city of Victoria. (Ministry of Finance)

(Seychelles News Agency) - The Chinese government has written off a loan to Seychelles worth 37,816,400 renminbi -- or $5.5 million -- after an agreement aimed at supporting Seychelles’ economy and reducing its debt load was signed this week.

Ambassador Yu Jinsong, representing China, and Maurice Loustau-Lalanne minister for Finance, Trade, Investment and Economic Planning, formalised the agreement at a signing at the ministry’s headquarters at Liberty House in the capital city of Victoria.

According to a press communique from the ministry, the loans from the Chinese government were for the provision of economic and technical cooperation.

Seychelles -- a group of 115 islands in the western Indian Ocean -- and China established diplomatic corporations in June 1976. Over the years, China provided the Seychelles with all kinds of aid and assistance.

In the field of infrastructure development, China was involved in the construction of the national swimming pool at Roche Caiman, educational institutions including primary and secondary schools, the Seychelles Polytechnic as well as different housing projects such as in the eastern district of Les Mamelles.

Since the setting up of the diplomatic relations, the two nations have been carrying out frequent exchanges and visits in the fields of culture, education and medical work.

China began to provide Seychelles with government scholarships in 1984 and many Seychellois students have studied in China. In the health sector, China began to send its medical teams to work in the island nation since 1985.

In more recent years, China has constructed the Palais de Justice and the National Assembly buildings on Ile de Port, a manmade island in the north of the main island of Mahe.

The state of the art SBC House to house both the island nation’ national TV and Radio station is also a grant from the government of China.  Under the agreement signed two years ago, the Seychelles Broadcasting Corporation is getting financial assistance to build a new broadcast house and purchase new equipment under the new economic and technical cooperation agreement Seychelles signed with China.

Seychelles Broadcasting Corp.'s new HQ to be completed in December 2022