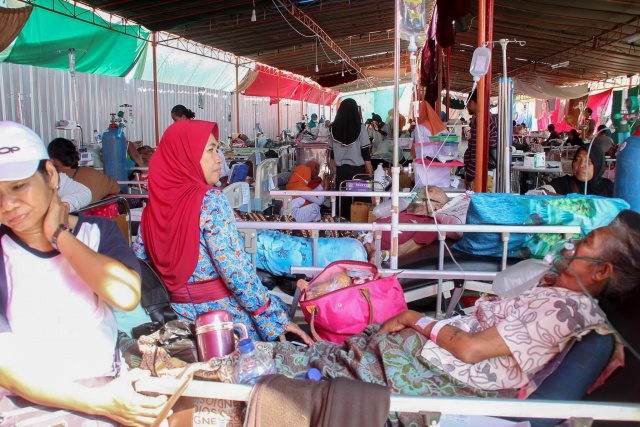 Patients and their family members stay at a makeshift hospital ward in Mataram on Indonesia's Lombok island on August 20, 2018 after a series of earthquakes were recorded by seismologists throughout August 19. Multiple earthquakes -- including a powerful and shallow 6.9-magnitude tremor -- have rocked the Indonesian holiday island of Lombok, killing at least five people and setting off fresh waves of panic. (PIKONG / AFP)

(AFP) - Multiple earthquakes -- including a powerful and shallow 6.9-magnitude tremor -- have rocked the Indonesian holiday island of Lombok, killing at least five people and setting off fresh waves of panic.

A series of quakes were recorded by seismologists throughout Sunday, the first measuring 6.3 shortly before midday which triggered landslides and sent people fleeing for cover.

It was followed nearly twelve hours later by a quake measuring 6.9 and at least five more significant aftershocks, according to the US Geological Survey.

The picturesque island is already reeling from two devastating quakes on July 29 and August 5 that killed nearly 500 people and made hundreds of thousands homeless.

"So far five people died and scores of people are injured. We are still collecting data on the exact number," Pramuja told AFP Monday.

Officials have evacuated a number of patients from a hospital in Sumbawa island for fear of worse destruction.

Blackouts had hit much of Lombok, according to a spokesman for the national disaster mitigation agency, Sutopo Purwo Nugroho, who posted pictures of cracked roads and video footage of a large fire that broke out in a village on Sumbawa.

One Lombok resident said the powerful tremor jolted him awake.

"The earthquake was incredibly strong. Everything was shaking," Agus Salim told AFP.

"We were all sleeping in an evacuation tent. I had just fallen asleep when suddenly it started to shake.... Everyone ran into the street screaming and crying."

A dozen foreign guests at the hotel Lina Senggigi, which is in a popular tourist spot, were ushered out of the building as the quake struck.

"The jolt was strong and quite long... Tonight we will ask our guests to sleep in the parking lot. It's safer that way," a staff member told Kompas TV.

Terrified evacuees in East Lombok prefer to stay in makeshift tents instead of going home.

"Power is still off until this morning. Fortunately nobody was hurt here but people are still in shock," East Lombok resident Ujip Udin told AFP Monday.

The morning quake caused panic but no widespread reports of damage. One person died from a suspected heart attack and there were reports of localised damage, Sutopo Purwo Nugroho said.

Landslides were reported in a national park on Mount Rinjani where hundreds of hikers had been briefly trapped after the quake in late July. The park has been closed since then.

Local disaster mitigation agency spokesman Agung Pramuja said several houses and other structures in the district of Sembalun, on the slopes of Mount Rinjani, collapsed on Sunday after being damaged by the previous two quakes.

The structures included checkpoints once used by trekkers climbing the mountain, Pramuja said, adding that the exact number of damaged buildings was still being checked.

Sunday's tremors were also felt on the neighbouring resort island of Bali but there were no reports of damage.

The latest tremor comes two weeks after a shallow 6.9-magnitude quake on August 5 damaged tens of thousands of homes, mosques and businesses across Lombok.

At least 481 people died and thousands were injured.

The hardest-hit region was in the north of the island, which has suffered hundreds of aftershocks.

A week before that quake, a tremor surged through the island and killed 17.

The August 5 quake left more than 350,000 displaced, with many sleeping under tents or tarpaulins near their ruined homes or in evacuation shelters, while makeshift medical facilities were set up to treat the injured.

Badly damaged roads, particularly in the mountainous north of the island, are a headache for relief agencies trying to distribute aid.

The economic toll of the quake is estimated to be at least five trillion rupiah ($348 million).

Indonesia sits on the so-called Pacific "Ring of Fire", where tectonic plates collide and many of the world's volcanic eruptions and earthquakes occur.

In 2004 a tsunami triggered by a magnitude 9.3 undersea earthquake off the coast of Sumatra in western Indonesia killed 220,000 people in countries around the Indian Ocean, including 168,000 in Indonesia.

General » Be a reporter: Write and send your article » Subscribe for news alert
Tags: Indonesia, earthquake