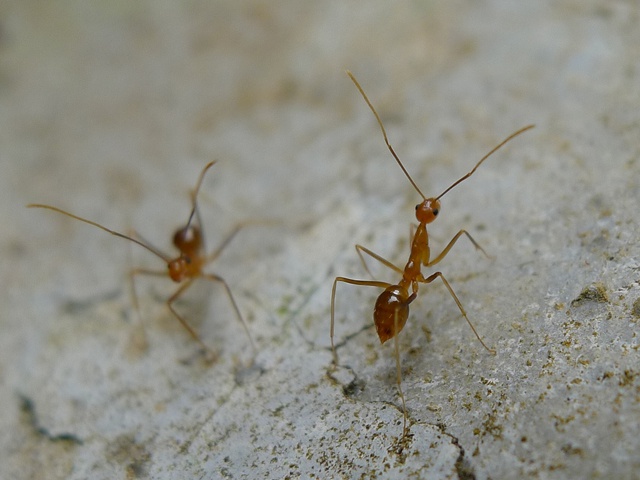 (Seychelles News Agency) - The UNESCO World Heritage Site of the Vallée de Mai on the second largest island of the Seychelles, Praslin, is visited by thousands of tourists each year who wish to see one of the most legendary natural palm forests in the world: the home of the famed coco de mer palm, which produces the largest nut in the world.

In the 19th century, the area was proclaimed by British General Gordon to be the original Garden of Eden and he thought the coco de mer tree to be the tree of knowledge.

Groups of visitors are taken along by tour guides as they explore the forest, looking for the elusive endemic black parrot, marvelling at iridescent emerald geckos and discovering firsthand how the coco de mer nuts grow in their natural palm forest habitat.

But these days there is one type of visitor that has been deemed most unwelcome by the Seychelles Islands Foundation (SIF), which manages the site: the yellow crazy ant (Anoplolepis gracilipes), one of the largest invasive ant species in the world and a severe threat to the biodiversity of the region.

According to a new study commissioned by the SIF and published in the invasive species journal NeoBiota, yellow crazy ants were discovered in the Vallée de Mai in 2009, although they have been established on Praslin for many years.

The study examines and assesses the effects and dangers of the invasive species to the unique, delicate ecosystem of the mature palm forest, which is home to many of Seychelles’ endemic flora and fauna.

The ants, which have already invaded other parts of the inhabited islands of Seychelles, including the national park in Praslin that surrounds the Vallée de Mai, are considered by experts to be a serious environmental and agricultural pest and are on the list of the 100 most dangerous invasive species on earth formulated by the International Union for Conservation of Nature (IUCN).

The ants have invaded ecosystems from Hawaii in the Eastern Pacific Ocean to Seychelles in the Western Indian Ocean. Brownish-yellow in colour, the ant displays erratic movements when disturbed, lending it the colloquial term “crazy ant”.

They nest in damp places, such as holes in the ground, in trees, under leaves and stones, or in sheltered spaces around homes. They are capable of forming super-colonies with multiple queens with densities of up to 20 million ants per hectare.

The pests spread by ‘budding’ out from an existing colony, moving up to 1km each year, but like other ‘tramp’ ants, their spread is mostly facilitated by human activity, as they hitch a lift with moving plants, vehicles, luggage and shipping containers.

The ants forage both on the ground and up in the canopy and are known to protect other pests, such as sap-sucking aphids, then ‘farming’ them for the honeydew they excrete. This disrupts pollination and spreads leaf mould, harming crops such as sugar cane and fruit trees, weakening and sometimes killing plants off entirely. They also spray formic acid to kill their prey, eating insects and other small animals for their protein. The species most at risk are frogs, lizards, other ants, snakes and ground-nesting birds and other small baby animals.

On Christmas Island, where they were accidentally introduced by human activity, yellow crazy ants have caused a serious decline in the populations of insects, snails, bats, geckos and skinks. They also decimate red soldier crab populations, triggering major changes in the island’s food chain and the rainforest ecosystem as a whole.

Yellow crazy ants also spread to Eastern Australia, and were first discovered in Cairns in 2001. Despite Biosecurity Queensland's attempts to eradicate them with a pesticide known as Methoprene, which was deemed safe for use in rainforests, the known infested areas have increased dramatically since 2007. Eradication of yellow crazy ants has been declared no longer feasible in Queensland.

A danger to the Vallée de Mai

The impact of the invasive ants can include direct effects such as displaced local species, and indirect effects on key ecological functions such as pollination and seed dispersal.

“Although the impacts and ecology of A. gracilipes have been well documented in degraded habitats in the Seychelles, little is known about this ant's invasion potential in endemic palm forest ecosystems. Praslin, the second largest granitic island of the archipelago, is home to Seychelles' native mature palm forest. This habitat represents one of the last island palm forest ecosystems in the world and hosts many species that are endemic to Praslin or the Seychelles,” explains Dr. Christopher Kaiser-Bunbury, TU Darmstadt, Germany, the lead researcher of the study.

The study found that the ants were so far confined to the north-eastern section of the UNESCO site and remained, interestingly almost static in size between the monitoring periods of April 2010 and December 2012, although some isolated outbreaks into the forest were reported.

It was found that the infested areas typically had significantly higher temperature and humidity and lower canopy cover than the rest of the palm forest.

Despite the slow colony growth, however, the study does point out some worrying findings. In the invaded areas, the abundance and species richness of the endemic tree-dwelling fauna were found to be significantly lower and molluscs were completely absent. The survival of snails and slugs, including two endemic snails: the brown and the blackfish snail, is a major concern, as they are thought to be essential for the functioning of the palm forest ecosystem.

Unfortunately, eradication of the ants is considered impossible by the experts, since the species is already well-established throughout the island. Chemical control also poses a considerable risk to non-invasive species, such as endemic ants.

The study has therefore advised further monitoring and research into methods of building natural resistance, such as the removal of non-indigenous broadleaf trees which host high numbers of non-native sap-sucking hemipterans, as well as the targeted control of invasive ant nests in the most disturbed habitats.