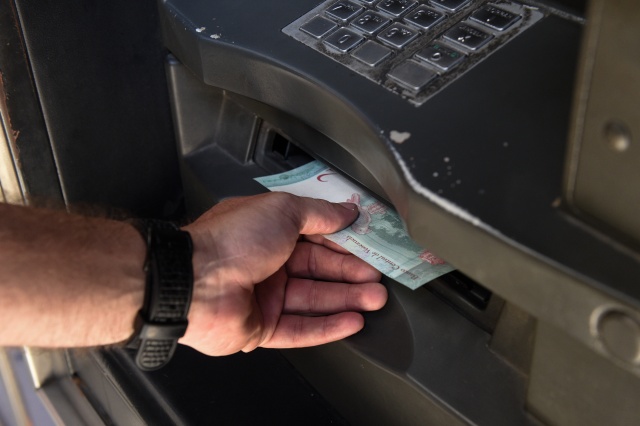 A man withdraws Bolivars from an ATM in Caracas on August 20, 2018. Caracas is issuing new banknotes after lopping five zeroes off the crippled bolivar, casting a pall of uncertainty over businesses and consumers across the country. (Federico PARRA / AFP)

The country appeared paralyzed. Most shops and businesses closed as Venezuelans reacted nervously to the issuing of the new "sovereign bolivar," launched to replace the oil-rich, cash-strapped country's crippled "strong bolivar."

Having been suspended for more than 12 hours on Sunday, electronic transactions resumed amid palpable uncertainty.

"We're all in the same boat, waiting to see what will happen," Maria Sanchez, a 39-year-old shopkeeper told AFP after withdrawing some cash.

Alongside the bolivar redenomination, Maduro announced other measures to tackle widespread poverty, including a massive 3,400 percent wage hike, the fifth such move this year alone.

Inflation that the International Monetary Fund predicts will reach one million percent this year rendered the old bolivar currency practically worthless, while the economic crisis has driven more than two million people to flee the country, according to the United Nations.

On the border with Brazil, the flow of fleeing people continued despite some 1,200 being driven back over the weekend in anti-migrant violence that got so bad President Michel Temer sent troops to the area to restore order.

"The Venezuelan people bear the tragic cost of the Maduro regime's rampant corruption and tyranny," tweeted US Vice President Mike Pence, adding that "recent moves will only make life worse for every Venezuelan."

"Nicolas Maduro and his regime have driven a once-prosperous country to economic ruin and humanitarian crisis," Pence said.

In the capital, Caracas, residents were skeptical about the new measures, not least since former president Hugo Chavez slashed three zeros from the bolivar 10 years ago without halting hyperinflation.

"Everything will stay the same, prices will continue to rise," 39-year-old Bruno Choy, who runs a street food stand, told AFP.

Three of the country's leading opposition groups -- Primero Justicia, Voluntad Popular and Causa R -- have called for a general strike and day of protests on Tuesday.

Government loyalist and president of the controversial regime-dominated legislature, Diosdado Cabello responded on Monday by announcing a "counter-march."

One of Maduro's most baffling reforms has been to anchor the new currency to the country's widely discredited cryptocurrency, the petro.

Each petro will be worth about $60, based on the price of a barrel of Venezuelan oil. In the new currency, that will be 3,600 bolivars -- signaling a massive devaluation.

Information Minister Jorge Rodriguez insisted the reform program would be funded "with oil income, with taxes and income from gasoline price hikes."

Maduro also announced a curb on heavily subsidized fuel in a bid to prevent oil being smuggled to other countries.

Fuel subsidies have cost Venezuela $10 billion since 2012, according to oil analyst Luis Oliveros, but without them, most people would not be able to buy fuel.

The blows kept coming on Monday as US oil giant ConocoPhillips said Venezuela's state oil company PDVSA had agreed to make a $2 billion settlement to halt the seizure of its Caribbean assets.

ConocoPhillips seized $750 million of PDVSA assets in May after winning two international arbitration cases against Venezuela for the "unlawful and uncompensated expropriation" of its heavy crude oil projects in the country by Chavez in 2007.

Earlier this month, a US court had also ruled that Canadian mining company Crystallex could seize shares in PDVSA's US-based subsidiary Citgo as payment for a $1.2 billion debt.

Now in a fourth year of recession, Venezuela has been hamstrung by shortages of basic goods such as food and medicine, and paralyzed public services, including water, electricity and transport.

Oil production accounts for 96 percent of Venezuela's revenue -- but that has slumped to a 30-year low of 1.4 million barrels a day, compared to its record high of 3.2 million 10 years ago.

General » Be a reporter: Write and send your article » Subscribe for news alert
Tags: Venezuela, finance

Venezuela's Maduro halts talks with opposition after US sanctions

Amnesty urges ICC to probe 'crimes against humanity' in Venezuela