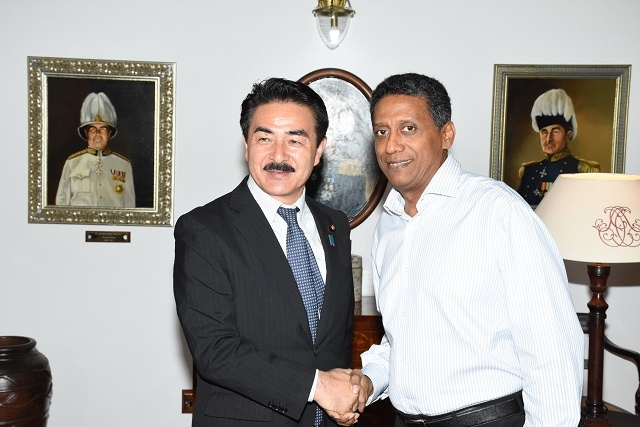 (Seychelles News Agency) - The Japanese State Minister for Foreign Affairs announced on Thursday that Japan will be opening of an embassy in Seychelles soon.

The statement was made during a press conference after Masahisa Sato paid a courtesy visit to President Danny Faure at State House, Victoria.

“With the direction we are going, this move will strengthen our bilateral relationship and continue to build on our good friendship,” said Sato through his translator.

Ambassador Selby Pillay, from Seychelles’ Department of Foreign Affairs, who was also present, told the press that the Japanese embassy is expected to open in January if everything goes as planned.

Other than the opening of the first Japanese embassy in the 115-island archipelago in the western Indian Ocean, Sato and Faure discussed the bilateral relationship that exists between the two countries.

“We talked about the ‘Free and Open Indo-Pacific Strategy’, under which we were trying to advance the blue economy as well as blue security,” said Sato.

He took this opportunity to invite Faure to the seventh Tokyo International Conference of Africa's Development (TICAD) to be held in Yokohama, Japan, from August 28 to 30 next year.

Since the establishment of diplomatic relations in 1976, the two countries have had collaboration in multiple areas such as fisheries and education.

In the past, Japan, through the Japan International Cooperation Agency (JICA), has helped Seychelles with key projects mainly in the field of energy, fisheries and coastal management.

Japan also assisted the islands to develop a comprehensive study of flood management and coastal management for the three main islands of Mahe, La Digue, and Praslin.

Fisheries, which is Seychelles’ second top economic contributor, is the sector which has benefitted the most from Japan. This included the building of several fisheries facilities including ice plants. Its biggest project was the expanding of the fishing port area and constructing fisheries facilities at Providence Port, on the east side of Mahe.